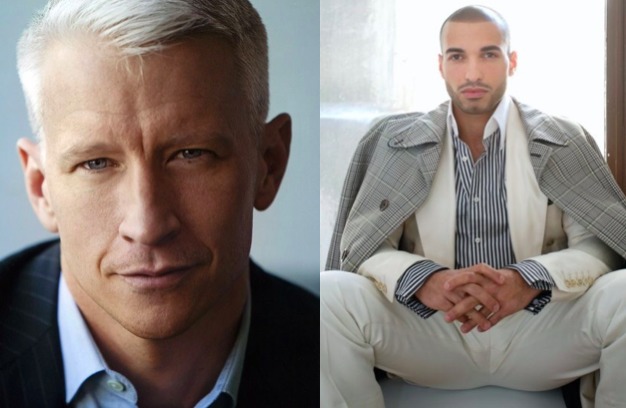 Actor Haaz Sleiman made headlines this week when he released a video on social media announcing that not only is he gay, but he’s a “total bottom.”

Now, the 41-year-old talks with Unicorn Booty about growing up as a gay Muslim, bottom-shaming in the gay community, and those times he hooked up with Anderson Cooper way back when.

Here some highlights from the interview…

On the first time he realized he was gay:

I knew I was gay when I was seven years old. I know I was born that way. I spent my whole life hiding. I’m a Lebanese Muslim, growing up in an Arab country. It was not easy for me. I had a very tough childhood. Let’s just say the tone of my life was very dark and very gray. It took life to beat the hell out of me to make me want to come out. I finally realized I am going to either live and thrive or disappear and die.

Within the [gay] community, bottoms are looked down upon. They are considered less than. There are so many bottoms, and it’s so disrespectful how they are treated. … Bottom shaming is no different than sexism. We don’t take bottoms as seriously. We say, ‘Tops are better.’ And then we eye roll when we hear that someone is a bottom. We hear that men are more worthy than women, and men are the center of the world. It is the same when it comes to the dynamic between bottoms and tops. It is OK if he is f*cking another man but it’s not if he is being f*cked by another man. I don’t accept this. This is not the world I want to live in.

On homophobia in Hollywood:

There are two people right now in power who were so horrible to me. One of them — a producer — told me they wouldn’t hire a closeted gay actor. ‘I never hire gay guys who are in the closet, but if you come out, I will not be able to cast you in a lot of roles.’ Another huge iconic gay figure saw me at a party and he came up to me. He pursued me because he was a fan of my work.

I got excited to share with him that I was gay, and he was like, ‘Oh? Thank you for telling me.’ But his tone changed. He thought I was straight before. Once he found out I was gay and in the closet, he wasn’t interested anymore. A lot of people in the gay community still have an issue when someone else is in the closet. If you’re straight and play gay, that’s awesome! If you’re too gay, you can’t play that straight role.

On hooking up with Anderson Cooper:

Specifically gay people who come from a type of gay culture where it is even more unaccepted and taboo. Whether it’s Islam or Christianity or Judaism, I hope people feel they are not alone and they are very powerful. And they are so powerful that they don’t allow anyone to hurt them. I want people who aren’t gay to have more respect for us. We won’t allow any other way. Maybe that’s a bit ambitious on my end. I guess everything starts with a dream.

Out of bounds
20 comments

Out of bounds
20 comments