Andy Cohen has highlighted the bizarre behavior of some internet trolls.

In an Instagram posting, the late-night talk show host posted screenshots of an interaction he had with someone online.

The person who messaged Cohen bluntly states: “You should try and be a better person for your son.”

Related: Andy Cohen’s son reacts to a lifelike doll of his father

Cohen became a dad when his child, Benjamin, was born February 2019. He often posts photos of himself and his kid on his social media.

“What am I doing wrong?” replied Cohen.

“Oh wow didn’t expect a response. I was just being a troll. You’re doing fine. Sry,” responded the stranger.

“I am indeed a real person. Thanks for understanding,” says Cohen.

“It’s so cool that you responded,” says the now start-struck messenger, before warning. “You probably shouldn’t confront trolls though.” 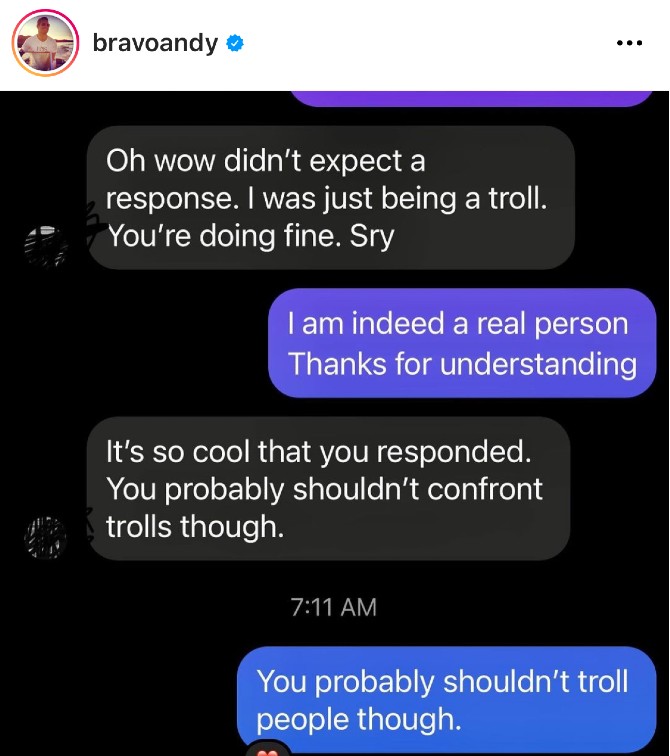 Cohen captioned his posting, “Social media in a nutshell.”

Related: Meet the father and son launching a new gay bar in Denver

Among those to comment on the exchange was actor Andrew Rannells, who simply said, “Oh good lord.” Fashion designer Isaac Mizrahi responded, “Sheesh.” Many were quick to tell Cohen what a great dad he is and to ignore the haters.