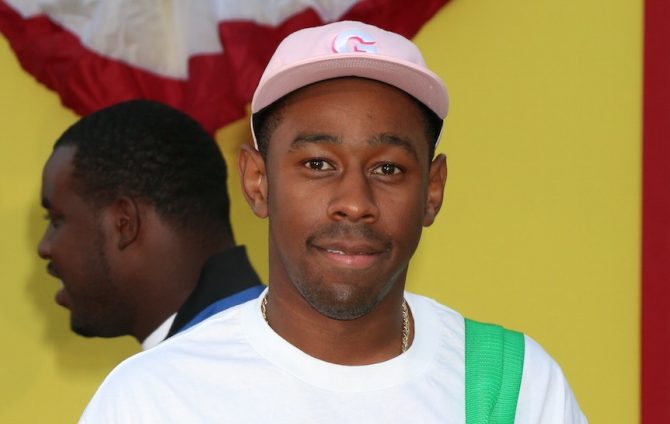 In 2015, Tyler, the Creator was scheduled to perform at the Reading and Leeds Festivals, an annual pair of music festivals in England. Instead, he was brought into an airport detention room and shown lyrics from years-old songs of his. Theresa May, then the home secretary, had banned him from the country, warning in an official statement that his work “encourages violence and intolerance of homosexuality” and “fosters hatred with views that seek to provoke others to terrorist acts.”

As The Guardian points out, rappers Eminem and Offset weren’t blocked from entering the UK over their homophobic words — and they haven’t written “some of the most refreshing verses about same-sex attraction in a major label hip-hop field of play,” as Vulture deemed them.

That said, the California native did drop homophobic slurs before he publicly came out, though he insists he wasn’t using it as a weapon. “Bro! That’s the thing, bro,” he tells The Guardian. “People knew I wasn’t. People knew the intent! That tree over there could be a faggot! Who hasn’t played Call Of Dutyonline and heard some 11-year-old call you that because you killed him? You knew the intent behind it and then people were faking, like, he’s homophobic? That was pissing me off. It’s just another word.”

Tyler spent a lot of money and time trying to lift his UK ban. “Then you get the official thumbs up. It was like: damn, finally,” he explains. “But it was so stupid to have to endure that. I got treated like a terrorist.”

Tyler, the Creator: ‘Theresa May’s gone, so I’m back in the UK’ https://t.co/ewSYlsxTlz

With the ban finally lifted, Tyler recently played three sold-out shows at Brixton Academy in London and had to cancel another performance in Peckham due to overcrowding.

Related: Tyler the Creator raps about hooking up with “all the sweet men I wanna” and other very gay things

“Yeah. I got treated like I was a murderer,” he continues, reflecting on the ban. “It was kind of stupid, and after a while, I was like: I don’t even want to come back. But it was more the principle of: ‘Y’all really did this, over this? In comparison to other sh*t people do, that y’all let in?’ So I’m happy that I got back. I feel like I won some invisible fight.”

His Brixton shows marked a victory lap for the 28-year-old. “It’s been four years since I’ve been back,” he told the adoring crowd. “Since this beautiful, flawless black skin was allowed in the country.”

And to The Guardian, he quips about May’s recent resignation: “She’s gone, so I’m back.”