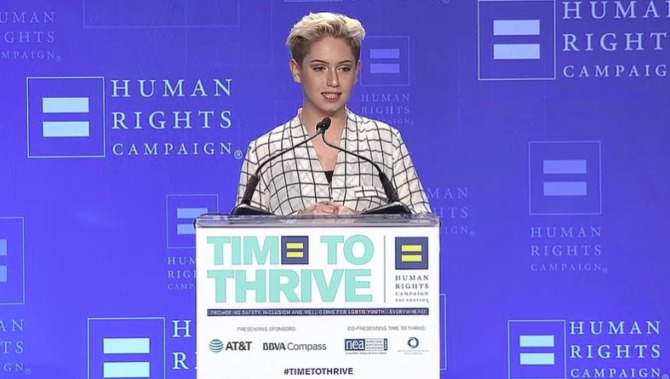 This profile is the part of a series of posts about young LGBTQ activists out to make change in the 2018 Queerties category Up & Coming.

Trust us, you know Brendan.

Remember that notorious, hilarious, and generally awesome video of a kid doing some fancy Lady Gaga dance moves in the background of a news video? Remember the hysterical facial expressions? More to the point, remember how the video went viral, capturing the attention of major celebrities like RuPaul, Queen Latifah and Lady Gaga herself?

After becoming an internet meme sensation, Brendan made a series of TV talk show appearances and attracted a huge social media following of her own with more than 515,000 followers on Instagram. Brendan even snagged a modeling gig for American Apparel, and used the platform to help raise awareness for queer issues, fight bullying and provide a role model for queer and trans youth to be themselves.

In 2016, while speaking at a Human Rights Campaign event, Brendan also came out as transgender and doesn’t mind using male or female pronouns.

Brendan continues to speak out and act as an activist, and shows no fear in at a particularly challenging time for transgender youth everywhere.

Oh, yeah, and Brendan still has those awesome dance moves.

Vote for Brendan in the 2018 Queerty Awards here.