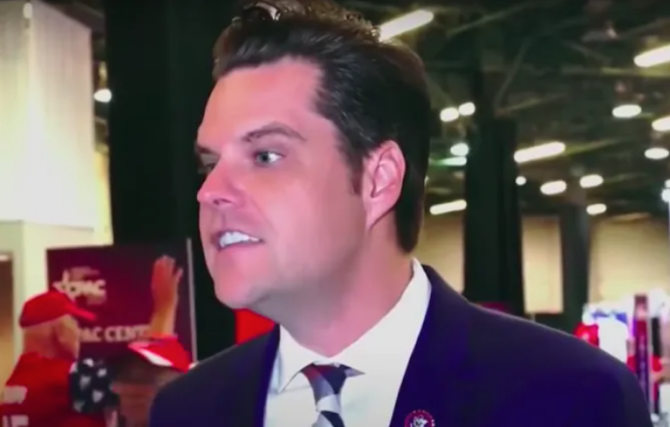 Things are not looking good for embattled Rep. Matt Gaetz. On Wednesday, Gaetz’s ex-girlfriend testified before a federal grand jury investigating him for sex crimes, leading many to believe the Department of Justice is getting close to indicting him.

The woman, whose name is being withheld in the press to respect her privacy, has been in ongoing negotiations for months with prosecutors about an immunity deal in which she’d avoid prosecution for obstruction of justice in exchange for her testimony against Gaetz.

Investigators said back in May of last year that she’s a “critical witness” they believe has information about a trip Gaetz took to the Bahamas in 2017, during which he may have paid to have sex with a 17-year-old high school student.

Gaetz, 39, is under investigation for sex-trafficking a 17-year-old, obstructing justice and violating the Mann Act, which criminalizes the transportation of people across state lines for the purpose of prostitution. He has repeatedly denied the allegations.

Related: Matt Gaetz, low on cash, has resorted to holding fundraisers with transphobes at local bars

Meanwhile, Gaetz’s former wingman, Joel Greenberg, has also been working with investigators after pleading guilty to six federal counts, including sex trafficking of a minor. His cooperation is part of a plea agreement in exchange for having dozens of other counts against him dropped.

In his plea agreement, Greenberg admitted to having sex with a 17-year-old “at least seven times.” He also said he “introduced the minor to other adult men, who engaged in commercial sex acts with the minor.”

The same 17-year-old told investigators that Gaetz had also had sex with her, one source familiar with the case told NBC News.

Gaetz and his ex-girlfriend were in an open relationship in 2017 and 2018. Early on in the investigation, Gaetz spoke on the phone with his ex and another woman who was already cooperating with the feds at that point and recording the conversation.

During that call, Gaetz allegedly obstructed justice, although details have not been released.

“After the latest revelations about the DOJ investigation into Matt Gaetz, an attorney with knowledge of the case tells us the case is a ‘slam dunk’ and that it’s not a matter of if, but when Gaetz will be indicted,” tweeted political site Meidas Touch.