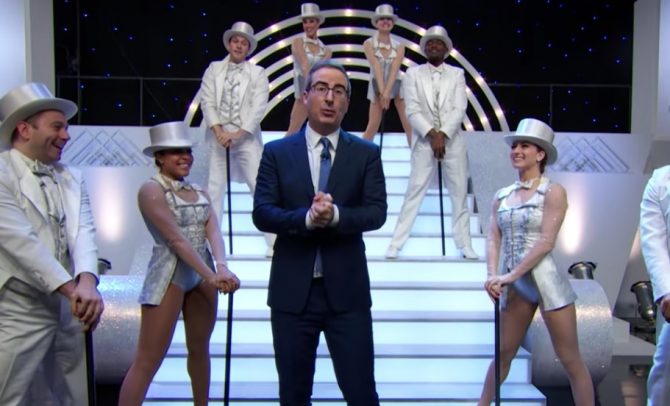 Lovers of musicals and haters of corporate greed can all agree that the closing segment of Last Week Tonight’s November 10 episode was a particularly satisfying watch.

Host John Oliver is no stranger to pulling stunts, and his big choreographed song-and-dance number punching back at coal king CEO Robert Murray held nothing back.

For context, Oliver’s main story of the night was a lawsuit Murray filed against the show after it ran a critical piece on Murray’s company, Murray Energy, in June 2017. That piece looked at a deadly accident at one of Murray’s mines, as well as questionable business practices Murray engaged in to squeeze maximum profit out of his employees, putting miners at real physical danger.

Murray filed a bogus defamation suit, not because he thought he could win, but because he knew it would cost HBO considerable time and money, and also send a message to journalists that criticizing him would result in a legal nightmare.

Related: Do gays care about John Oliver? Billy on the Street (hilariously) investigates.

Oliver won the suit, but Murray may have succeeded with his underlying goals.

Part of the judge’s ruling noted that “loose figurative language that cannot reasonably be understood to convey facts” is perfectly legal, which Oliver translated to: “We can say whatever we want about him as long as it’s clearly a joke.”

Oliver’s team really ran with that idea. Broadway may have just found its next hit.

Disorder in the court
24