The much-anticipated new series arrives on Hulu earlier than expected this week. Love, Victor follows the events of Love, Simon picking up several years later as the handsome young Victor (Michael Cimino) arrives at Creekwood High on the precipice of sexual discovery. As he struggles with his sexuality, he reaches out to Simon (again played by Nick Robinson) for advice on how to navigate sexual exploration. Unlike Love, Simon which had a deliberately bright and fluffy feel, Love, Victor has a great mix of humor and real human drama beyond just coming out. In many ways, its cross-generational, ensemble storylines feel more akin to This is Us. That’s not a bad thing, either. Thoughtful and tender, it’s one of the best new dramas we’ve seen this year.

The (Virtual) Step-Out: The Surrogate

Writer/director Jeremy Hersh makes an auspicious feature debut with this drama about a gay couple trying to have a child through a surrogate mother. Jess (Jasmine Batchelor) and Josh (Chris Perfetti) have been best friends for years. She’s delighted to act as a surrogate and carry Josh and his husband, Aaron (Sullivan Jones)…until tests reveal the fetus has Down’s Syndrome. Needless to say, friendships get tested as the three wrestle with the moral question of to proceed with the birth, or terminate the pregnancy. What happens if the three can’t agree? A lesser film would have found easy answers or one-dimensional characters, but The Surrogate treats its three leads with respect. Nobody in this film is wrong for feeling as they do, or for the choices they make. That makes the film a provocative drama, and heralds Hersh as a queer auteur on the rise.

The Delicate: And Then We Danced

We caught this beautiful drama—the first Georgian film to deal with LGBTQ themes—at Sundance this year as it finished out its festival run. And Then We Danced centers on Merab, a Georgian man in his early 20s. After spending his entire life training in traditional Georgian dance, he finds his passions awakened by Irakli, another handsome young dancer. As their relationship grows, Merab’s risks his career to embrace his sexuality, even while his passion propels him to a new level of dancing ability. Less a romance than a story of a man challenging cultural attitudes about masculinity, And Then We Dancedsparked outrage in its native Georgia and death threats for director Levan Akin. The controversy alone would warrant the film a look, though curious viewers will also find a sensitive and penetrating story of queer resilience…something that feels all too fitting for this cultural moment.

The Messy: The Circuit

While polished in composition, the chief entertainment value of the digital reality series The Circuit comes from the messy drama of its characters: a group of self-described circuit queens trying to climb the ladder of fabulousness. What begins as a simple exercise in life in and out of the party scene quickly escalates into something else entirely as COVID-19 and the notorious “Rona Rave” wreak havoc on New York, and on production of the show. Creator/director Daniel Lui and producer Trey Sherman treat their cast with empathy—maybe even too much at times—but the resultant series has the same peculiar, captivating quality as the first season of Jersey Shore. You can’t believe what you’re seeing, and you can’t look away. In showbiz, folks, that’s never a bad thing.

Speaking of queer resilience, pop singer Peter Abichaker dropped this restless ballad about the strength of LGBTQ people to weather isolation. Abichaker uses the metaphor of dancing in the rain, longing for lighting to release the energy pent up inside to illustrate the feelings of oppression so many of us experience in day-to-day life. With piano accompaniment reminiscent of Lady Gaga’s work at its most melancholy, “Struck” touches and awakens something beautiful within us. For all its somber brooding, it gives us hope.

The Sip: The Stonewall 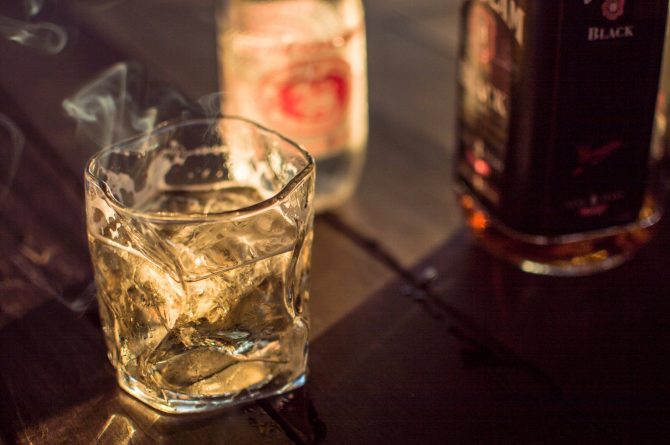 Happy pride month, people! In honor of the protests that sparked pride, and in solidarity and respect to the current protests seizing the world, we offer up this rustic whiskey drink, so named for the Stonewall Inn. It’s a fine way to salute the heroes of history and today.

Mix together over ice in a cocktail glass and serve.