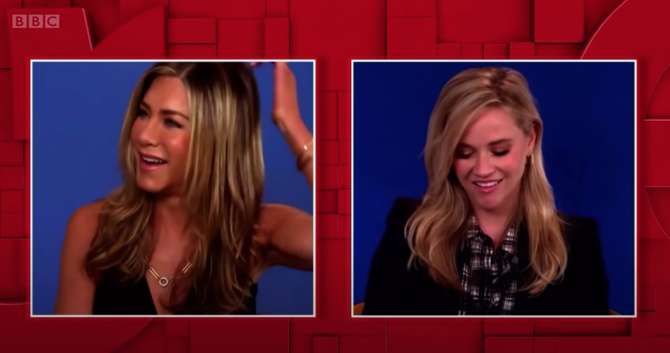 During a recent video appearance on the BBC’s The One Show promoting the upcoming season 2 of the Apple TV+ drama The Morning Show, Jennifer Aniston became visibly bothered when the show’s host interrupted her.

Anniston was explaining the lessons she learned researching her role at ABC’s “Good Morning America” when presenter Jermain Jenas commented that she clearly isn’t a morning person.

“I learned the slow burn [morning shows are]. It’s a very vampire state of life and mind that you guys live in. Everybody comes alive in the middle of the night, and it’s a slow-moving train,” Aniston said.

“I got there at 5 in the morning and the hallways were quiet and people are just slowly waking up, and then all of a sudden, the train starts moving and it gets crazier and crazier. It’s utter chaos.”

“Reese, I’ve got to be honest with you,” Jenas said, addressing Morning Show co-star Reese Witherspoon. “Jennifer’s pretty much sold it to me that she’s not a morning person.”

The ‘insinuation’ didn’t land well, and Anniston’s reaction did not hide her displeasure.

You can watch the exchange starting at the 3:00 mark:

Fans immediately took to social media to debate whether the Friends star overreacted.

And by ‘debate,’ we mean they overwhelmingly agreed that yes, she had overreacted:

Jennifer Anniston’s ‘tude in this interview is cringe. She keeps on looking to the side awkward #theoneshow

Did anyone else catch Jennifer Anniston’s negative reaction to the male presenter regarding the morning person bit? Awkward ? #theoneshow

I really like Jennifer Aniston but was there really any need for her to be like that with Jermaine Jenas as he was only having a joke with her.

To Anniston’s credit, this was probably the 12th back-to-back interview she did that day and the moment is sure to be forgotten within the hour. Maybe sooner.

Season 2 of The Morning Show premieres September 17 on Apple TV+.