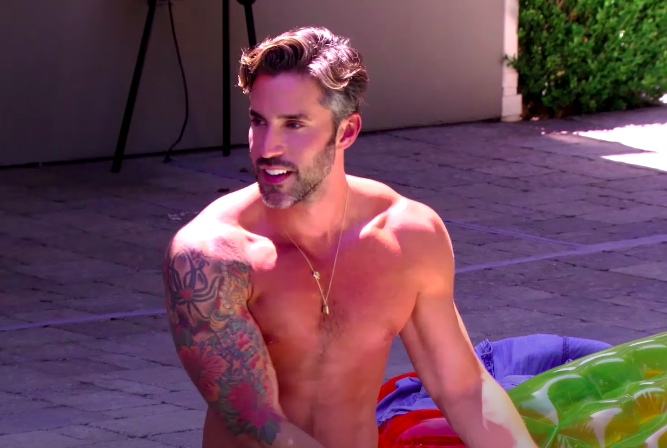 There’s been a lot of buzz about ABC possibly doing a gay version of its hit reality show The Bachelor after former star Colton Underwood came out last month. But what many people don’t seem to remember is that a gay version of the show already aired on Logo back in 2016.

Finding Prince Charming was hosted by Lance Bass and starred interior designer Robert Sepúlveda Jr., who we had honestly forgotten about until now. Being reminded inspired us to take a little trip down memory lane and to do some internet sleuthing to see what Sepúlveda’s been up to in the years since.

In September 2016, the then 33-year-old was cast on Finding Prince Charming, where thirteen men competed for his heart before one was selected to be his mate. Logo put a ton of money into marketing the series. But right before it was set to premiere, a tabloid reported that Sepúlveda once worked as an escort.

After the story broke, he immediately started doing damage control. In an interview with HuffPo, he confirmed that, yes, he had done sex work, but it was only for a brief period in his early 20s.

“The past was the past,” he said. “I was young and it helped through college.”

Nothing wrong with that, of course. Except that he wasn’t forthright with Logo prior to filming Finding Prince Charming, which, given that the show was supposed to be about, um, reality, posed a credibility issue. It also didn’t help that, while Sepúlveda was downplaying his past publicly in interviews, he was lashing out at people privately on social media.

In a scathing, since-deleted Facebook comment, Sepúlveda said gay men should be ashamed of themselves for attacking a member of their own community… before going on to attack members of his own community. 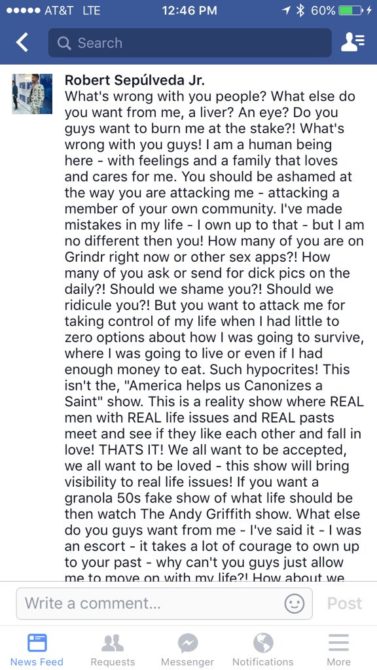 And in a since-deleted Instagram post, he threatened to sue cyberbullies for shaming him about his past.

“Targeted harassment, shaming and bullying is wrong and against the law – it doesn’t matter the age!” he wrote. “Listen closely folks, if you come for me, we will come for you and prosecute you to the fullest extent of the law. BULLYING IS WRONG!”

Logo said it wasn’t aware of Sepúlveda’s history–and, presumably, his temper–until after production had already started, and none of the other contestants on Finding Prince Charming knew about it until the story actually broke. Lance Bass tried to help whitewash the controversy by joking, “We all have our past. I was in a boy band. I’ll admit it.”

But by then the damage was done. Many felt Sepúlveda was two-faced, that he deliberately withheld information about himself, and that the whole show was based on a lie.

These feelings were further bolstered after it was reported that the LGBTQ non-profit he claimed to helm on the show, Atlanta Rainbow Crosswalks, was inactive after becoming ensnared in a messy fundraising controversy, according to Project Q Atlanta.

It’s fine that Sepulveda travels across the globe to get paid to have sex. It’s not OK that he portrays himself as an activist and non-profit leader when he’s neither. No one needs a Prince Charming like that. Not even reality television.

Adding a layer of awkwardness to all of this was that, throughout Finding Prince Charming, Sepúlveda talked about truthfulness and how being honest was one of the most important traits he looked for in a partner.

Finding Prince Charming tanked in the ratings. Barely 150,000 people tuned into Logo to watch the premiere. Meanwhile, the reunion episode drew less than 125,000. And the reviews were even worse.

Jeffrey Self at Vulture called the show “depressing”, writing:

The most depressing thing of all? Gay Bachelor made everyone admit their secrets to him and yet he keeps all his own secrets to himself. The secrets we can see by Googling his name. Secrets that could help a lot of people. But that wouldn’t help those rainbow sidewalks in Atlanta, would it?

And Kevin O’Keeffe at Mic wrote:

Finding Prince Charming‘s problem is not that it’s reality TV–it’s that it’s bad reality TV. This is an iffy premise, and it needs expert production to work. But the editing, story planning and casting all fail this show, making it something far worse than the offensive mess many assumed it would be: It’s just dull, and it’s not worth even a hate-watch.

Season 1 lasted for a total of eight episodes (plus a reunion) and ended with Sepúlveda choosing Eric Leonardos to be his mate. Less than six months later, the two had broken up. A second season was announced by Logo, but it never came into fruition.

Not long after the final episode aired, contestant Chad Spodick, who dramatically walked off the show in episode six, took to Instagram to accuse Sepúlveda of being a liar and embezzling over $40,000 from Atlanta Rainbow Crosswalks, among other allegations.

Sepúlveda never responded to the accusations and Spodick later deleted the post.

In March 2017, Sepúlveda told Us Weekly that Finding Prince Charming had made him so famous that he couldn’t leave his house without people recognizing him.

“I can’t even go on a hike without people asking me about my relationship status,” he claimed, adding that he was being bombarded with offers to appear on other reality shows.

“I have a lot of production companies that are interested in doing shows with me, so I’m going to focus on that and my pocketbook. At the end of the day, nobody’s going to take care of me but me.”

Then in April 2018, he told Los Angeles Blade that of all the major pop culture moments to happen in his lifetime, the most significant had to have been the one he was a part of.

“Being on Finding Prince Charming,” he said. “That’s definitely a pop culture moment, and I’m so glad I was part of that.”

Sepúlveda hasn’t appeared in any reality shows since Finding Prince Charming and today runs his own interior design business called RSJ Design, which specializes in luxury residential and commercial spaces, although the company’s official Instagram page is mostly just thirsty pictures of himself. (Maybe it’s part of its marketing strategy?)

He’s also preparing to launch his own luxury candle and jewelry line called RSJ Collection. According to the company’s website, the jewelry is intended to be “genderless” and the candles are “inspired by history.” No word yet on when the products will be available to purchase.

We’re glad Sepúlveda’s interior design business is thriving and that he’s having success in his creative pursuits. Now, here’s a video of him showing how you can achieve your very own “Sepúlveda stomach.”