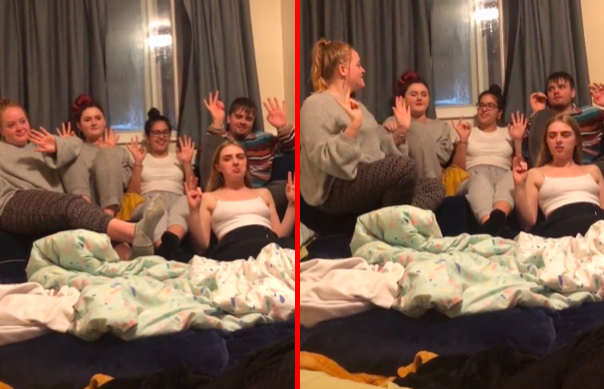 A Tiktok video of a young woman calling out her gay best friend for having sex with her boyfriend has gone viral.

TikTok user allyvlogs1 uploaded the video earlier this week. It shows a group of five college students playing a game of “Put a Finger Down.”

“Put a finger down if one of your best friends slept with your boyfriend and the rest of your friends didn’t tell you about it for over six months,” the young woman says.

There’s an awkward pause as all the friends look around at one another. Then the man in the group says, “Who the f*ck told her?!”

The man and woman erupt into a screaming match. Eventually, she storms out of the room. Moments later, the two can be heard hollering at one another from the other side of a door.

That’s as delicious as it is tragic.

People have had quite a bit to say about the video since it was uploaded to Twitter. Many would like to see a sequel. Others claim the whole thing is scripted. But if that’s the case, then these are some seriously good actors.

Check out some of the comments…

This needs to be commissioned by ITV as a full drama immediately https://t.co/RxY8NNz5ve

I need to know everything! 😂 how did it end?!

Are they all isolating together because if so……..24HR DRAMA!!!

That girl with the glasses was so quick to cotton on

Related: His mom found his poppers. What happened next was, well, kinda awkward.