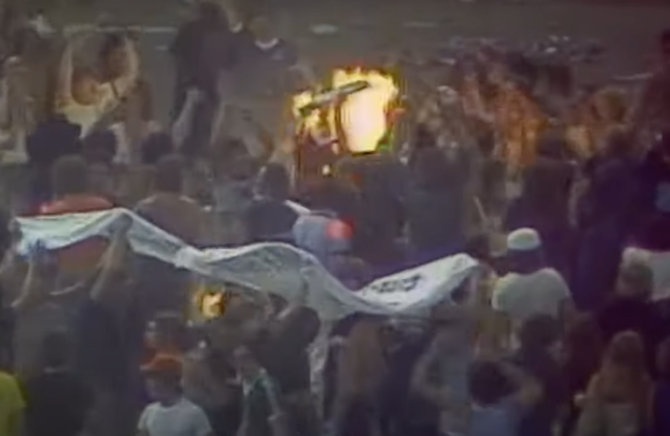 Baseball fans are used to receiving swag when stadiums host regular ‘promotion nights’, from bobble heads to drink coupons. But on this day in 1979, the Chicago White Sox lured crowds with a much different proposal — come to a double-header at Comiskey Park and witness crates of disco records get blown to pieces in between games. Chaos and rioting ensued, and many historians and disco artists feel the incident was steeped in homophobia and racism.

Disco was wildly popular in the late ’70s and deeply rooted in minority communities, including gay nightlife culture. Artists like Donna Summer, ABBA and Sylvester regularly pumped through the speakers at gay bars and clubs. At the same time, there was a backlash against the genre from rock fans who felt it was somehow ruining music.

When Chicago’s WDAI-FM switched from rock to disco and DJ Steve Dahl got fired in 1978, Dahl became something of a folk hero for disco haters. White Sox owner Bill Veeck and his son saw an opportunity to harness the musical tension, partnering with Dahl for what would be the strangest night of baseball anyone had ever witnessed.

Dubbed “Disco Demolition Night”, the event not only sold out the 50,000 seat stadium, it drew an additional 20,000 disco haters who mobbed outside the ballpark and eventually stampeded their way inside. Attendees were told anyone who brought a disco record to the ballpark to blow up would be admitted for 98 cents. 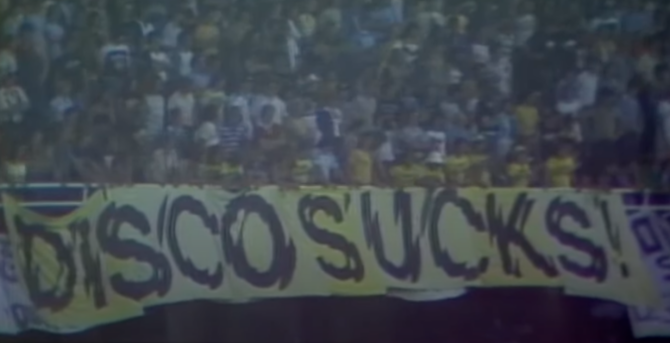 The crates soon overflowed with records, many of which weren’t even disco, according to a former Comiskey Park usher. He told The Guardian in 2019 that many attendees simply brought “anything made by a Black artist.”

With nowhere to put their much-hated albums (why did they own them in the first place?!), folks in the stands started throwing them onto the field instead, prompting the first game to be paused several times. They also started throwing bottles, firecrackers and lighters — a sign in retrospect that things would soon turn out of control.

After the game concluded, it was time for the big boom. Dahl took center stage along with the overflowing crates, and the ensuing explosion was enough to blow a huge hole in the field as shards of vinyl flew skyward.

Related: Of course a radio station called The Eagle has the perfect way to silence homophobes

The blast triggered some fans’ worst instincts, and 5,000 to 7,000 attendees rushed the field in a mass riot. Equipment was destroyed, bases were stolen, and soon a giant bonfire blazed on the field. Police arrived in riot gear and ultimately arrested 39 people for disorderly conduct.

With no functioning field left to play on, the White Sox were forced to forfeit their second game.

Noted rock critic Dave Marsh of Rolling Stone wrote at the time that Disco Demo was “your most paranoid fantasy about where the ethnic cleansing of rock radio could ultimately lead. … White males, 18 to 34, are the most likely to see disco as the product of homosexuals, Blacks and Latins.”

Dahl has denied the claims.

Here’s radio coverage of the debacle, along with video footage from the stadium: