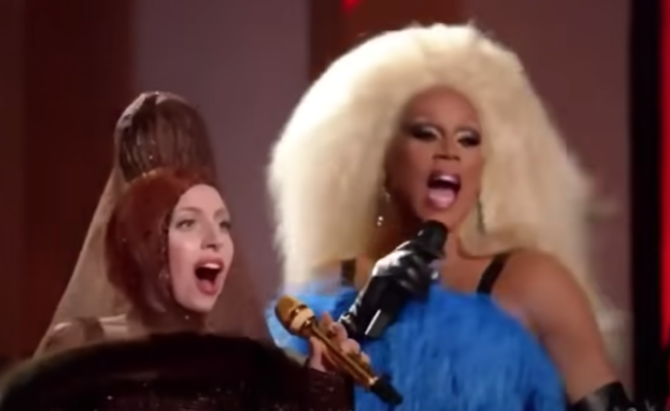 Drag Race UK vs The World came to a glittery finish on Tuesday, as Blu Hydrangea lip-sync battled her way through Jujubee and Mo Heart to be crowned the first-ever “queen of the mothertuckin’ world.”

A much-discussed element of the latest Drag Race spinoff has been the grand prize. Instead of $100,000, the winning queen received the aforementioned title and the opportunity to record a duet with host RuPaul.

Blu joins good company of those who’ve belted it out with Ru — scroll down for some memorable Ru-ets over the years:

In 1994, Elton John rerecorded his 1976 duet with Kiki Dee, “Don’t Go Breaking My Heart,” with none other than RuPaul. 1994 was also when Ru landed a modeling contract as the first face of MAC Cosmetic’s Viva Glam line — not a bad year! The upbeat dance track reached number three on the Billboard Dance Club Songs in the US — and number one in Iceland! There’s a remixed version by legendary producer Giorgio Moroder if you want something to really grind your teeth to.

Lady Gaga welcomed Ru at her 2013 Thanksgiving Muppets holiday spectacular, and the pair covered David Bowie’s 1981 song “Fashion.” We’re still not exactly sure what Gaga was wearing on her head, but Ru looked stunning in a blue, feathered gown.

You’ll never look at a jar of peanut butter the same way after bouncing along to Ru and Big Freedia’s forever classic from 2012, “Peanut Butter.” And if you need to brush up on your twerking, the video has you covered.

We think this track from 2013 might have benefitted from letting Lady Bunny shine a bit more — what’s a girl gotta do to get her own verse? — but it’s a handy song if need the audio equivalent of adrenaline before hitting the club.

Ru and former Weather Girls member Martha Wash serve singer-songwriter realness on 2014’s “Can I Get an Amen.” There’s another version featuring the cast of Drag Race season 5, but we’ll stick with this one!