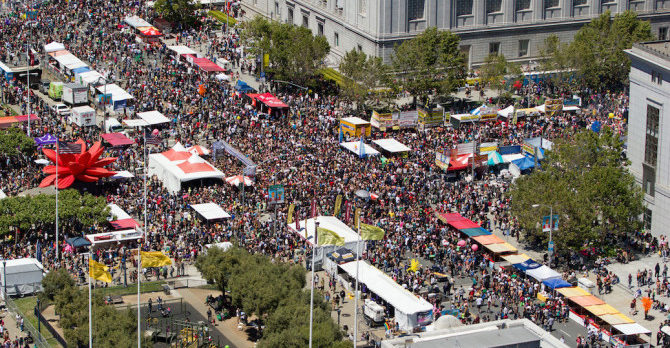 It’s hard to believe that the epic international event that is now San Francisco Pride began as a rag-tag group of fiery activists way back in 1970, coming just three years after the city’s breakthrough Summer of Love. The annual mega-event is testament to the courage of the original marchers but also to the power of the original idea: That everyone should be proud of their identity, not matter how different from the majority or what others say.

In fact, the notion of pride now far outstrips gay or LGBTQ pride specifically. The ranks of parade marchers and revelers are swelled by at least as many non-gay people as gay, which is why the city expects at least one million people to descend on the middle of the city for pride weekend, June 23 to 25.

Looking back at San Francisco pride images through the ages, it’s easy to see why. Everything the best in humanity is on colorful display: Protesting, dancing, singing, celebrating, all with a nod to diversity unrivaled anywhere on the planet. And not just the traditional markers of economic, racial, ethnic, geographic and age diversity. That’s just the beginning. The range of sexual and gender identities, expressions and causes is a modern marvel. Oh, and did we mention the costumes you’ll encounter along San Francisco’s Market Street, from Steurt to 8th Street?

No wonder the event has such incredible cross-over appeal.

The first march traced to the origin of San Francisco Pride parade came in 1970 when a small band of protesters, including several drag queens, marched down Polk Street. They later moved en mass to Speedway Meadow at Golden Gate Park. The protest was inspired by a similar parade in NYC to commemorate the Stonewall uprising. After skipping 1971, some sort of parade/march has been held every year with attendees multiplying exponentially along with the success of the political and cultural equality movement.
2. The Parade

Launching on the Embarcadero, participants, from PFLAG moms to go-go boys, began lining up well before the 10:30 am march, readying their outfits and floats for the trek down Market Street to to the Civic Center Plaza, approximately two miles away.

The festival sprouted from the Sunday morning parade. Located at the Civic Center in front of the City Hall steps it is a collection of booths hawking food, beer and wares, from t-shirts to kinky offerings. There are two stages where performers entertain at least 100,000 people in the audience. 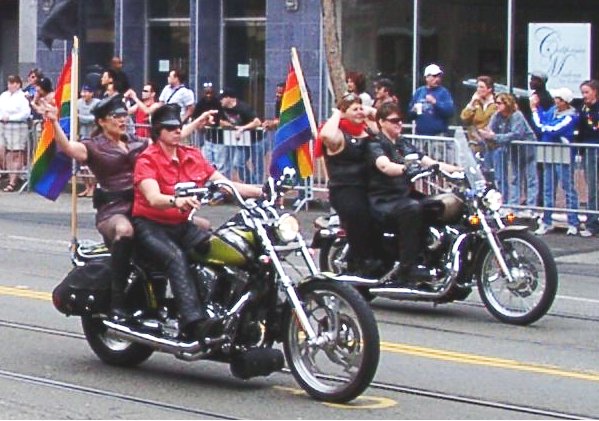 Dykes on Bikes is a motorcycle contingent of thousands that’s a ubiquitous and colorful pride presence, generally leading off the parade. Toplessness, leather outfits and roaring engines make it a crowd favorite. When the dykes on bikes rumble by, you pretty much know the parade is underway. The Dyke March, where you will see many of the bikers, takes place the Saturday before the Sunday morning march.

The San Francisco Trans March takes place Friday, June 23, at Dolores Park and winds through the city to the Tenderloin. Since its inception in 2004 to give trans and gender non-conforming folks a safe space, it has grown into one of the world’s largest such events and spawned imitators everywhere. 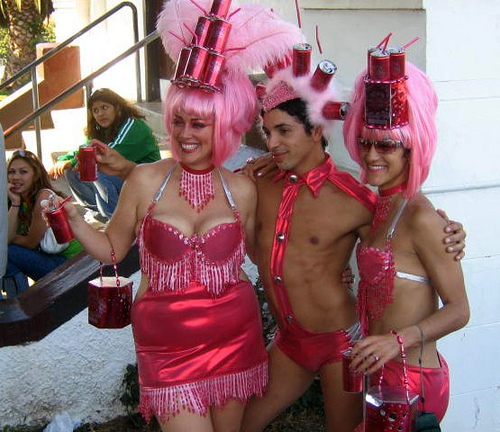 Pink Saturday is the street party held the Saturday night before San Francisco Pride in the Castro, right after the Dyke march, and generally attracts at least 100,000 celebrants dressed in some version of pink that has become the de facto queer symbol alongside the Rainbow Flag.
7. The Rainbow Flag 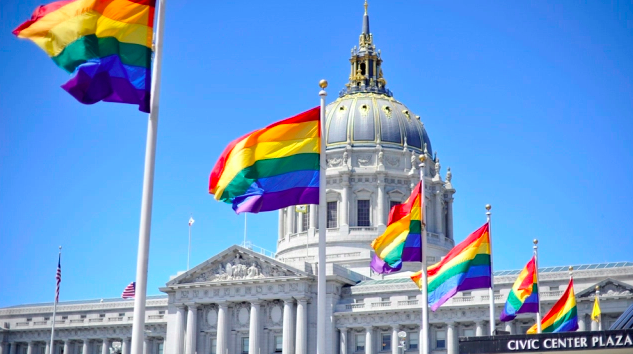 The flag was created by San Francisco artist & activist Gilbert Baker for the 1978 Pride Parade. It originally had eight dazzling stripes, but Baker removed two to simplify the symbol of peace & joy. A six-stripe Rainbow Flag flies over Harvey Milk Plaza in the Castro, and is one of the most frequently photographed flags in the world. 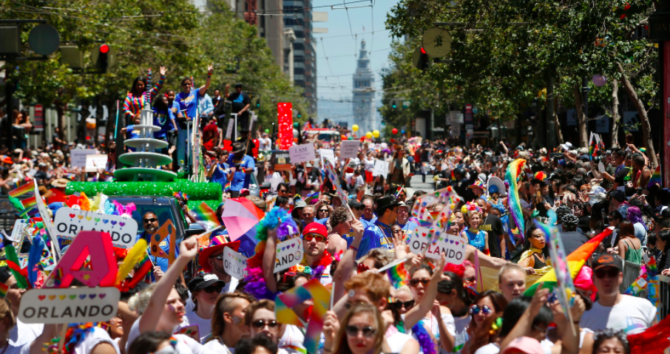 In some ways, 2017 SF Pride is a return to its roots. The politics of the nation have turned hostile to equality, and religious discrimination bills are on the march in conservative states. The anniversary of the Pulse Nightclub massacre came June 12, and the Supreme Court marriage equality ruling happened June 26, 2015. Those earth-shattering events, along with the unfinished LGBTQ agenda, has injected a new urgency into pride, promising to make it as fiery and action-packed as that first one, in 1970–47 years ago to the day.