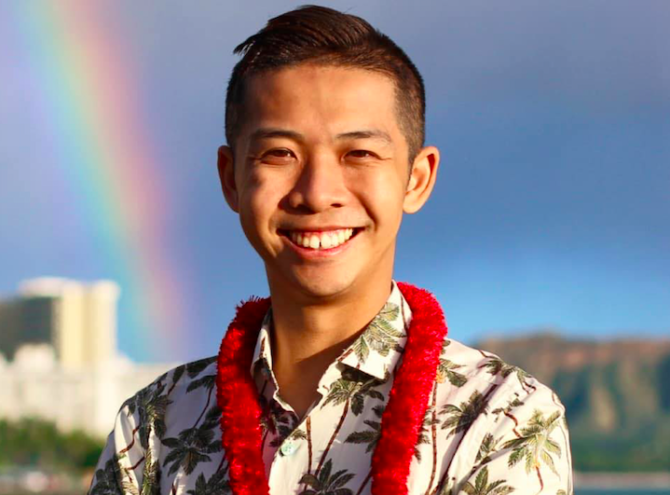 Last year, Hawaii state Rep. Adrian Tam had a colossal task before him. Not only was he running to become Hawaii’s only out LGBTQ representative, but he was running against an anti-LGBTQ, white supremacist neo-Nazi. To put it mildly, a lot was at stake in his November 2020 race.

But Tam didn’t just win. He absolutely pulverized his opponent, Nicholas Ochs, founder of the hate group Hawaii Proud Boys, with 63% of his district’s vote, compared to Ochs’s paltry 29.7%.

“I am happy and very hopeful that members of the community realized [The Proud Boys] didn’t represent the values of Hawaii,” Tam told the Daily Beast at the time. “Groups like these will always exist, but it’s up to us to not only tune them out, but to get our message out there and change minds so more people don’t join them.”

In his heavily Democratic state, 28-year-old Tam was far more focused on the issues he wanted to tackle than on any insults Ochs’ supporters hurled at him throughout the bitter and, at times, downright hateful campaign.

In August, he told LGBTQ Nation that his sexuality was actually not that big of a factor in the race.

“Our district is very LGBTQ friendly, and our entire state is as well,” he said. “I know that there are many young adults and children in Hawaii that are probably LGBTQ, and I’m hoping that my election will inspire them to know that things are possible.”

“It was really unfortunate,” Tam told Advocate. “He said racist things toward Asian-Americans and degraded people of color. And, he had a number of inflammatory social media posts in the past that were called out. One of the posts on his feed was of him urinating in a sacred volcano, so voters in the district were immediately turned off.”

But Ochs’s lack of social media presence meant Tam was free to spread his own messages far and wide. He ran with a focus on combatting Hawaii’s rising cost of living, as well as diversifying its economy to make it less dependent on tourism and more focused on green manufacturing.

Before taking on Ochs, Tam also conquered an arguably bigger hurdle: Beating incumbent Tom Brower, who had held the seat since 2006, in the Democratic primary.

The faster we get vaccinated, the quicker we can return to our pre-pandemic lives.

Get vaccinated — it’s free, it’s safe, and it helps. pic.twitter.com/HsNQhVRiqz

While working for Senator Stanley Chang, Tam wrote the historic bill that led to the state’s 2018 ban on conversion therapy for minors. He also played a role in banning the “gay panic” defense in the state.

Trans lives belong. I am profoundly disappointed and appalled by this attempt to erase the trans community as I view this as an attack on all of us. Let this be a reminder that the fight for equality is far from over. https://t.co/ivMw1UPdo4

“What I want voters to know about me is that I’m just a local boy born and raised in Hawaii who desperately wants to call this place home,” he also told LGBTQ Nation.

“But with everything that’s going on, with the high cost of living, with the rising housing shortage, homelessness, crime, and everything, it has become impossible for me and people like me with my resume to live here, and I’m going to fight to make sure Hawaii works for everyone and not just a select few.”

Proud to join my fellow freshman lawmakers at today’s rally to #StopAsianHate pic.twitter.com/6FrxXQhkMs

Those who say that racism is not a public health crisis must have their eyes stitched closed or are too inept at reaching out to marginalized communities.