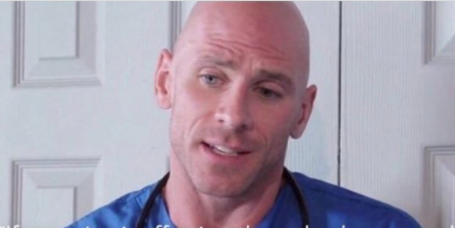 “If a vaccine is effective, then why do we need to pressure people to take it?” Dr. Sims said, according to Wolf.

Except there is no Dr. John Sims, and the image Wolf shared was actually adult film performer Johnny Sins dressed up as a doctor for a scene.

Wolf quickly deleted the post, but not before it could be used against her credibility.

Ken got Naomi Wolf — who is an anti-vaxxer and has been spreading misinformation left and right — to post a fake quote from a fake doctor along with a photo of the adult film star Johnny Sins.

This is how top-notch her vetting of information is. https://t.co/MAmsKFAS0F

The irony is that Johnny Sins probably has a much better idea of infection control than Naomi Wolf.

This isn’t the first time Wolf’s sourcing has been called into serious question.

In February she claimed that she overheard an Apple employee “boasting about attending a top secret demo” where “they had a new tech to deliver vaccines w nanopatticles that let you travel back in time.”

In 2019, publisher Houghton Mifflin Harcourt canceled the U.S. release of Wolf’s book, “Outrages: Sex, Censorship and the Criminalization of Love,” after it was discovered she got wide swaths of information completely wrong.

The 400-page book examines the persecution of homosexuality in Victorian Britain and could have been a very useful resource for LGBTQ historians and the general public… if only the information Wolf provided in it was actually accurate.