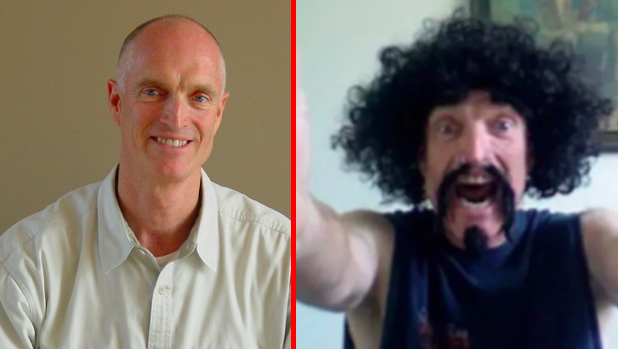 You know a person must be truly terrible if their own children don’t want anything to do with them.

Now, as election day looms nearer, his two adult children are urging voters not to vote for their father.

“A lot of his views are just very out there,” West’s daughter, Emily, tells Kansas City Star. “He’s made multiple comments that are racist and homophobic and how he doesn’t like the Jews.”

“I think it’s just insane that people are putting out his signs.”

Son Andy adds: “My dad’s a fanatic. He must be stopped. His ideology is pure hatred. It’s totally insane.”

West, who won the GOP primary for the Missouri House’s 15th District by nearly 25 points, has a history of pushing bogus conspiracy theories on his morning radio show, including one about “Jewish cabals” who are “harvesting baby parts” through Planned Parenthood.

Earlier this year, he came under fire for praising Hitler, saying: “Looking back in history, unfortunately, Hitler was right about what was taking place in Germany. And who was behind it.”

Some of West’s other remarks include saying Islam is “a political movement masquerading as religion” and attacking sex ed and LGBTQ youth groups, saying “many parents and students don’t want to have to deal with alternative sex ed, and the LGBT clubs and staff at all the public high schools today.”

“There is a level of political rhetoric and anger out in the world today that is providing people with more extremist views a comfort to come forward and share those extremist views,” Emily says. “I’d like to say he is unusual this year … but there are a whole variety of folks.”

Andy adds: “If he gets elected, it would legitimize him. Then he would become a state official.”

Even the Missouri Republican Party doesn’t want people to vote for him. Last week, it put out a statement that read:

Related: 5 reasons to vote as if your life depended on it: #1 Trans equality