At only 34, Dillon has already won acclaim for their stage and television work, with a recurring role on Orange is the New Black and as a series lead on the Showtime drama Billions. Dillon also won wide praise for their activism, working as a queer nonbinary person in Hollywood. In fact, Dillon may well hold the distinction as the most high-profile nonbinary person in the world.

This May, Dillon steps into their most significant feature film role to date, having snagged a part in John Wick Chapter 3: Parabellum. In the movie, Dillon plays a mysterious villain known only as The Adjudicator, slinking about in the shadows, and striking fear into all those they meet. The film also elevates Dillon into a higher pantheon of performers, appearing alongside stars like Keanu Reeves, Anjelica Huston, Laurence Fishburne, Halle Berry, and Ian McShane.

Queerty managed to carve some time out of Dillon’s busy schedule to chat about the new movie.

This is your first film in 8 years, and it’s probably your biggest role to date in a movie.

Oh my gosh, it was honestly all exciting. It certainly could have been a very scary, very intimidating entree into a big budget Hollywood movie, but that was totally mitigated by everyone from Lionsgate to Chad [Stahleski] the director, to Keanu himself, they were all so welcoming. Some of the first words out of people’s mouths were, “Welcome to the John Wick family.” Right from the start we were a family, we were an ensemble. We all respected each other and were there to have fun and make a movie together which we all love.

How did Chad Stahleski convince you to take the role?

I didn’t need much convincing. I’d seen the first two and was a fan. So when I got the call that Chad wanted to meet me, you know, I hoped Chad and I would hit it off. Every meeting with a producer or a director or a casting director I’m vetting that person just as much as they’re vetting me because it’s my life too. So if I’m going to work for a month, two months, a year on a project, I want to make sure that it’s with people who I can communicate well with, who share a vision for the type of work. So Chad and I, we just vibed right away. I said, “If this movie is going to be anything like the first two, I’m in.” I said yes before I even read the script.

Chad had described the role to me, and I’d seen the first two. So it was a no-brainer for me to just say yes. Then I met with Keanu and heard his thoughts about The Adjudicator—it was actually his idea. Then the producers just said, “Welcome to the family.”

The Adjudicator is such an intriguing role. We never get a backstory about the character. We just see this slinky, semi-vampiric character that conveys power. Did you develop your own backstory as to the character’s origins? What sort of inspiration did you have for the part?

Well, I actually try not to develop too much of a backstory on my own. I don’t want to be wrong. Let’s say there is a prequel or a John Wick 4 and we get to learn more about The Adjudicator. I didn’t want to come up with anything misinformed in this film. Now, that being said, there were certainly conversations between Chad and myself about, for instance, The Adjudicator and Zero’s relationship. Had they met before? What was the last time they saw each other? Do they like each other? All those questions that are pertinent in order to tell this story in this film: certainly we talked about that.

So what sort of images did you have that informed your performance?

Hmm. Well, The Adjudicator was there on the page, to begin with, as a no-nonsense, all business, sort of get in-get out character. And they didn’t make the rules, they’re there to enforce them. So for them, it’s very straightforward and not very emotional, which isn’t to say that they’re not multi-dimensional human beings with emotional life, but their job is pretty straightforward. So through conversations with Keanu and Chad, we developed this character who, as you said, has this quiet intensity, this quiet power. They wanted this character who could walk into a room and intimidate everyone, including characters you don’t think, can be unsettled. It felt very collaborative. Then, the last piece is the costume. Our incredible designer Luca Mosca had this vision, combined with Chad and Keanu’s vision of this high-femme, sort of European, fashion-forward, architectural, using sensuous fabrics. I love it because the character is non-binary, assigned female at birth, but you know, just because they dress in a femme way that doesn’t make them a man or a woman. That’s just their style. I love that kind of representation.

I think that being nervous is a sign of being underprepared. I think that had I, for instance, not memorized my lines or not worked on the emotional intention of the scene, whatever—had I gone into those days unprepared, I would have been nervous. But I came to play. I came to bring my best game knowing that everyone else was going to do the same. So when you know the bar is that high, for me, that is a challenge I want. It’s exciting for me. I just looked forward to those days. 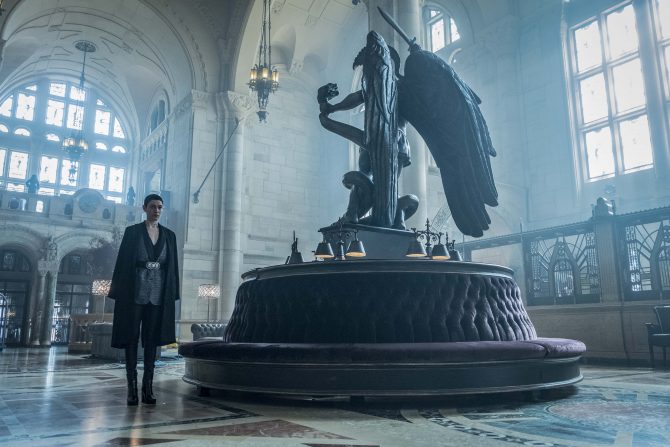 I also noticed nobody uses pronouns when referring to the character. You, of course, identify as non-binary. Is the character meant to be as well? Was the role written that way, or was that something you brought to it?

The character was not written as a non-binary character. That was something I brought to Chad & Keanu, and it was something they were immediately open to. It wasn’t like I had to even convince them. I just said, “We have an opportunity here.” There was nothing in the script that required the character to be a trans person. So I said “I’m a non-binary actor. Let’s make this character non-binary.” It’s really a credit to Chad, Keanu and Lionsgate. These films have always been incredibly diverse going back to the first one, in terms of ethnic diversity, cultural diversity, people of all shapes, sizes, colors. Even martial arts diversity. So adding diversity to the third installment, they were just like of course.

So, you’re having a hell of a good career right now. As a non-binary actor—probably the most prominent in the world at the moment—do you feel like you should only be considered for non-binary roles? Or is part of being non-binary that you could play any role, regardless of gender?

I think that I want to play the roles for which I am the best actor. There are roles that won’t be right for me, for instance, a role that requires someone who was assigned male at birth to appear naked on screen. I was assigned female at birth, that role is not right for me. Or a role that is written as a trans woman of color—I am not those things, so that’s not a role I am the best actor for. I do think in terms of my non-binary identity it does sort of add versatility to the parts that I might be able to play. That’s really exciting for me.

Have you encountered much blowback from agents, casting directors, etc. who either discouraged you from acting, or who told you not to come out? We hear this from so many actors—they get dropped by their agent for coming out, or told they will only play drag queens for the rest of their life.

I mean, I’ve heard them too. Fortunately for me, and I’m only speaking of my experience, I have not had blowback. I moved back to New York City at 28 and auditioned for a play and through that play got my agent. Obviously, I’m still learning about who I am and growing and changing every day. But at 28 years old, I certainly had a very strong sense of my queer identity. And I carried that with me in every room I walked into. So when my agent came to see me in the play I was doing, I was playing Lucifer in a radical retelling of the Bible. Lucifer is a character traditionally played by a man. So they were already seeing me in a non-traditional role. From the moment I met them, I just said, “This is who I am. These are the types of roles I want to play. If you’re down, I’d love to work together.” They were like we’re down. So I never went into the meeting with my agents feeling like I needed to pretend to be something other than I was. I can imagine how difficult that would be for someone, to feel like they’re in a room and they can’t be honest about who they are.

What’s next for you? More Billions?

Well, we’re wrapped right now and we have our fingers crossed that we’ll get the go-ahead to do Season 5. Showtime likes to go year-by-year, and we haven’t gotten official notice yet. But it’s looking good. Right now, I’m actually working on my first EP, which is super exciting. I sing, I dance I do it all. I’ve been writing my own music for years. The time just feels right. I got hooked up with a producer I’m really excited to work with, so that’s my main project right now.

What can you tell us about it? Can you liken it to a style? A genre?

It’s definitely going to be inspired by artists I love. Stevie Wonder, Nina Simone, but also I love Joy Division and Radiohead. I love R&B and Soul. I have eclectic taste. It’s going to be an amalgamation of everything I love but through my unique lens. 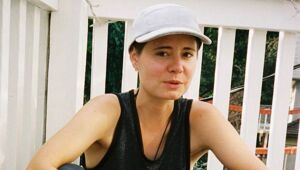