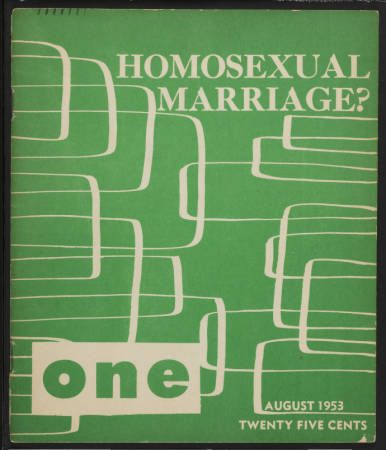 In honor of LGBTQ History Month, we’re looking back at the first gay publication in America—ONE magazine. Launched in Los Angeles in 1953, ONE was published by One, Inc., which grew from The Mattachine Society, the seminal gay-rights group founded by Harry Hay. Its editorial founders were Martin Block, Don Slater, and Dale Jennings, who also served as editor-in-chief. Produced on a shoestring and sold for 25 cents, ONE began to change the course of history with unapologetic exploration of homosexuality and the societal taboo against it.

This is the first in our series of ONE magazine cover stories.

This groundbreaking 1953 cover essay was written under the pseudonym E.B. Saunders, who chastised the nascent gay-rights movement for ignoring the subject of marriage and monogamy. While the tone was scolding, it’s clear is that this prescient author was laying the groundwork for the “assimilation versus rebellion” debate that was to come.

One would think that in a movement demanding acceptance for this group, legalized marriage would be one of its primary issues. What a logical and convincing means of assuring society that they are sincere in wanting respect and dignity!

Nothing in the literature of the Mattachine Society and little of ONE magazine is dedicated to exploring the idea of necessary homosexual monogamy. The idea seems stuffy and hide-bound. We simply don’t join movements to limit ourselves! Rebels such as we, demand freedom!

Of course, Saunders’ stance is riddled with the biases of the day: that monogamy should be a norm, that legal marriage should be the only “respectable” way to enjoy sex, and that heterosexuals are any more naturally monogamous whether married or single. Nevertheless, the author might have been surprised to know that their clarion call would take shape sooner than anticipated and that the US Supreme Court would legalize gay marriage not in 2053 but 2015. They might be just as surprised by the current attitude toward gay marriage not as a stuffy, hide-bound duty, but a choice.

Magazine cover courtesy of One Archives