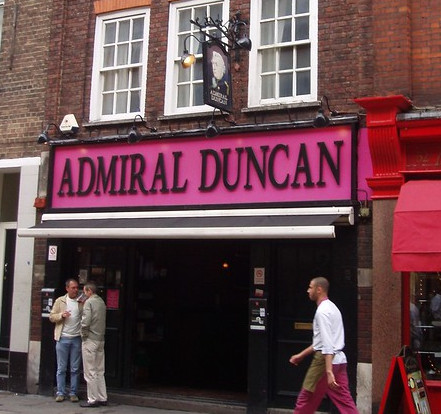 Strange news out of London this week: Employees of the Admiral Duncan, one of the city’s oldest queer pubs, have reported receiving a bizarre postcard accusing the bar of turning its street gay. Can streets just change teams like that?

The postcard, which had a postmark from the Philippines–which somehow makes this story even weirder–congratulated the bar on surviving a 1999 nail bombing. It then proceeded to condemn the Admiral Duncan for attracting queer folk.

“To staff,” the note reads. “First may I salute you all for surviving a bomb blast but Old Compton Street was much better before you lot turned it into a gay street. In 1961 when I was picking up my cup final ticket it was full of Wops, Yids and Paddies, the salt beef of the Earth. All the Italians were either Juventus or Milan fans and Soho was great.”

“Wops, Yids and Paddies” are derogatory slurs against Italians, Jews and the Irish, respectively.

“Before you lot turned it into a gay street” pic.twitter.com/LqQrFrftP3

“Now you have to wear a chastity belt to feel safe,” the postcard adds.

Homosexuality was illegal in the UK until 1967. The Admiral Duncan, however, has attracted an LGBTQ crowd since the 1700s, when the bar had a reputation as a “Molly House;” code for a gay bar.

Still, the area of SoHo where the Duncan sits did not become a gay mecca until the 1990s, suggesting that the sender of the postcard may have waited a bit too long to complain about the state of the neighborhood.