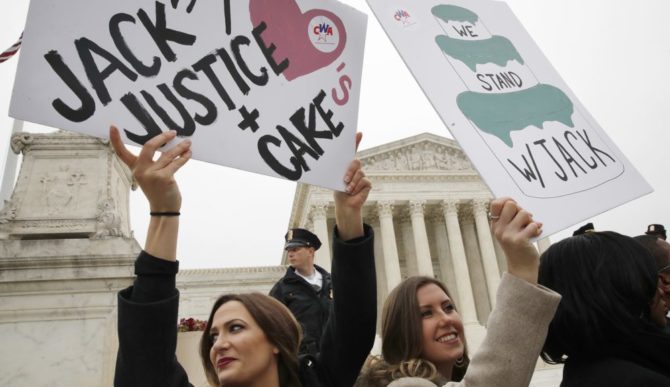 The Supreme Court has ruled 7-2 in favor of Jack Phillips, the antigay baker from Colorado who refused to make a wedding cake for a same-sex couple, and American bigots couldn’t be happier.

Outside the Supreme Court building, antigay Christians/religious freedom fighters cheered cries of victory and praised God as the verdict was announced.

The Supreme Court has ruled 7-2 in favor of the Christian baker who refused to bake a cake for a gay couple.

It's great to see the gay couple in the case lose. Their behavior was truly vindictive, vile, and despicable. They are the bullies here and they deserve to lose and be embarrassed.

We thank God for answered prayer! Today the Supreme Court has ruled in favor of Jack Phillips, the Colorado baker who refused to create a wedding cake for a same-sex marriage ceremony. This is a huge win for religious freedom!https://t.co/jXX6pd6xaQ

Don't forget allegedly the gay couple in the #MasterpieceCakeshop lawsuit shopped around until they could find a cake baker that would refuse service.

This is about attacking religion! Not gay rights!

“Today’s decision means our fight against discrimination and unfair treatment will continue,” said Charlie Craig and Dave Mullins, the two men denied a cake by Phillips. “We have always believed that in America, you should not be turned away from a business open to the public because of who you are.”