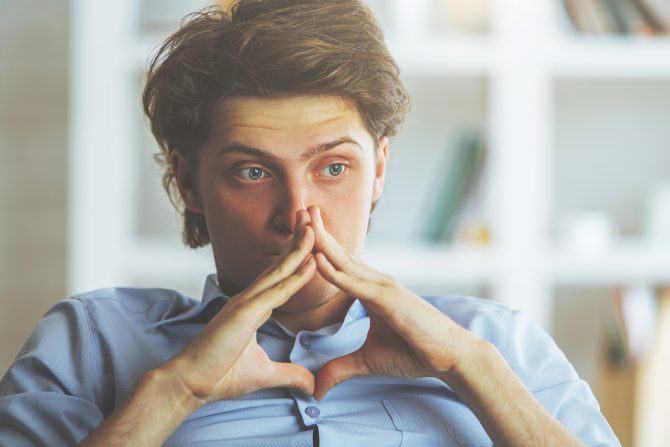 A guy was racked by insecurity after realizing that his boyfriend’s ex is “hot AF,” but his fellow Redditors are doing their best to save his relationship and peace of mind.

“Yesterday, while talking to my BF, he showed me his Instagram feed and some funny memes, but after I see him scrolling for a while, I see a man I thought was a model, and then he said, ‘I shouldn’t have this,’ and he unfollowed the guy,” the advice-seeker wrote in a recent thread.

The guy specified that his boyfriend and the ex didn’t last long, that the ex was an “assh*le,” and that the ex was “looking for other guys” on Grindr during the so-called relationship. But the ex did text the boyfriend on New Year’s Eve to ask how the boyfriend was doing and even added the smiling-face-with-horns emoji — “which, if you ask me, [is] inappropriate,” the Redditor added.

“I acted as if nothing happened, but in reality, I was really angry and paranoid about that,” the guy continued. “He has a better body than me, and he has European heritage and God knows what else.”

And the part the advice-seeker said he hated the most was that his boyfriend and the ex hooked up in a car. “With me, we do it only when a bed is available,” he explained.

He went on: “My boyfriend claims the most delicious, hard, and nasty sex has been with me, but I don’t know if it’s to make me feel better. In fact, today we are turning one more month, and I don’t know what we should do to celebrate it.”

Related: Support swoops in after guy says he ‘loathes’ his high-pitched voice

Commenters on the post sagely advised the guy to have a sit-down with his boo and hash it out. “Communication is the most important aspect of any relationship,” one wrote. “It is normal to be a bit curious or even a little jealous of an ex. But he is with you! Just talk to him. Why did they break up?”

Another concurred, writing, “Never be jealous of a boyfriend’s ex. You have him now. There are reason(s) for that and it is silly to get insecure. … Do not get jealous. You are only going to ruin the relationship you have now, and he will be telling his next boyfriend he broke up with you because you were jealous of his ex.”

And another commenter was more succinct: “If the ex were so wonderful, he’d still be with him. That ended, and he chose you. Accept that.”

Here’s wishing the advice-seeker and his boyfriend a happy, loving 2020!