Britney Spears is enjoying her freedom. Yesterday she posted a series of Instagram images detailing a night out in Los Angeles, followed by some eye-opening naked images (with emojis covering her nipples and crotch).

In the first set of images, Spears, 40, posted some images of a nice meal out in a restaurant alongside screenshots of notes from her phone.

“OK, so I did it!!!”, she noted of her night out. “I went to dinner at a very nice place in Los Angeles. I didn’t have any expectations at all because I haven’t been out in a while … I was just told the food was great here.”

She went on to say the unnamed restaurant was “absolutely beautiful. I looked up and it was a glass roof, I could see the stars … OK, but don’t act too excited, you know I’m an adult and I have to be cool … I immediately go to the bathroom … holy crap!!! I wanted to stay in the bathroom forever!!! It was so beautiful and the lady in there offered me candy!!!! I declined … it was so girly and they played music in there … I loved it!!!!”

She went on to praise the food, before disclosing she also enjoyed a glass of wine.

“I failed to mention I had my first glass of red wine in 13 years!!! I felt more sexy in that restaurant than I ever have in my entire life.”

By the time the second course arrived, Spears says she was in tears. 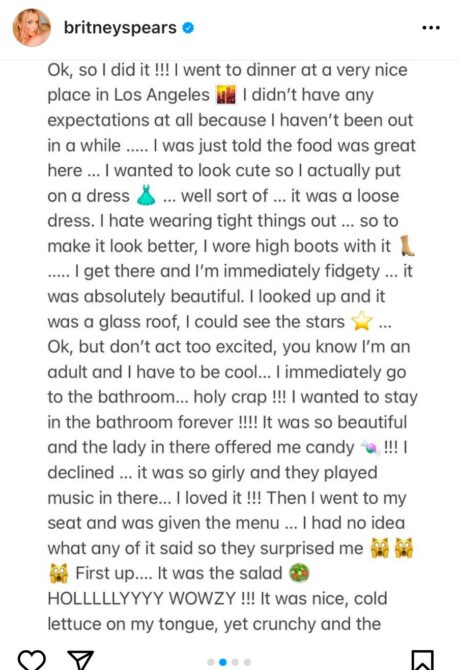 “It made me want to cry, so I did!!! I cried over food in this beautiful restaurant … I couldn’t believe what I was experiencing with this food … it was one of the most magical experiences of my life and I will never forget it.”

In a separate posting later, Spears then posted the nudes, captioning them: “Free woman energy has never felt better.”

Spears has posted topless photos before, with her hands or arms covering her nipples. On those occasions, some commentators expressed concern.

This time, Spears disabled comments on both postings. At the time of writing, the “Free woman energy” pics have collected over 2million likes.

Spears was placed under a conservatorship in 2008 following her well-publicized mental health battles. Her father, Jamie Spears, subsequently had a say in all areas of her life whilst the legal arrangement was in place.

Late last year, a judge lifted the conservatorship after Britney’s lawyers argued that the singer was now able to look after her own affairs.

After previously vowing not to release new music or perform live whilst she remained under guardianship, Spears—who is engaged to ​​Sam Asghari—has recently teased that new music may be on the way.

Whilst most of the conservatorship has now been lifted, an accountant, John Zabel, still has power of execution over Britney’s estate trust. A further court hearing, on January 19, will decide whether this arrangement should stay in place.

Related: Britney Spears just dropped a hint about what she’ll do next