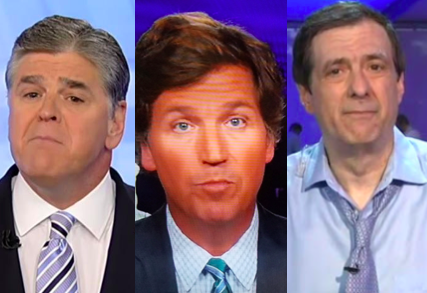 It’s been almost three weeks since we last heard of a sex scandal happening at Fox News. Well, that streak just ended in a big, big way.

Two former Fox News employees have just filed a lawsuit in the U.S. District Court for the Southern District of New York accusing former Fox News chief national correspondent Ed Henry of raping one of them, while the other says she was sexually harassed by popular primetime anchors Sean Hannity, Tucker Carlson, and Howard Kurtz.

In the 39-page complaint, Eckhart alleges that Henry “groomed, psychologically manipulated and coerced” her into a sexual relationship in which he called her his “sex slave.”

Additionally, the lawsuit alleges, “when she would not comply voluntarily, [Henry] sexually assaulted her on office property, and raped her at a hotel where Fox News frequently lodged its visiting employees.”

Henry was fired from the network earlier this month over complaints of “willful sexual misconduct in the workplace.”

Meanwhile, Areu claims she was sexually harassed by Hannity on the set of his show. One day, he offered $100 to anyone on the crew willing to date her.

The lawsuit states Hannity continued trying to auction off Areu to the male crew members, leaving her “completely mortified.” When nobody took him up the offer, he chided them for being “afraid to take out a beautiful woman.”

Another time, Areu says she was working on Carlson’s show when a producer whispered in her ear that Tucker wanted her to stay after the show to “chat.”

When they were alone together, Carlson allegedly told Areu he would be alone in New York City that night in a hotel room “without any wife or kids.”

Yet another time, Areu claims she was a guest on Howard Kurtz’s Sunday show when he pressured her to have dinner and drinks with him and then go back to his hotel room, saying he could introduce her to his buddy Ann Coulter as a lure.

Of course, Fox News is denying everything. In a statement, the network says:

Based on the findings of a comprehensive independent investigation conducted by an outside law firm, including interviews with numerous eyewitnesses, we have determined that all of Cathy Areu’s claims against FOX News, including its management as well as its hosts Tucker Carlson, Sean Hannity & Howard Kurtz and its contributor Gianno Caldwell, are false, patently frivolous and utterly devoid of any merit.