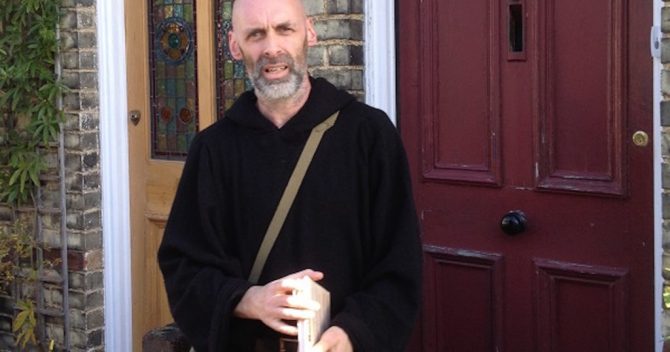 A homophobic monk has been excommunicated from Catholic church not because for his vehemently antigay actions, which have resulted in at least one hate crime conviction, but because he trash talked the Pope in a blog post.

Damon Jonah Kelly was kicked out of the church by the Bishop of Argyll and the Isles after he wrote a scathing post attacking Pope Francis for “behaving in an ambiguous fashion towards homosexuals” and calling him a “great heretic.”

According to The Scottish Sun, Kelly, a self-proclaimed “criminal for Christ,” was asked to take down the post. When he refused, he was excommunicated. In response, he called the punishment “extraordinary” because “pedophile priests who’ve been put in prison have never been excommunicated.”

“We had enough of the bishops’ silence,” Kelly said. “A church that accepts homosexual relations, accepts abortions, is not Christ’s church.”

Kelly has a long history of making inflammatory remarks about LGBTQ people.

In 2014, he papered his town with leaflets declaring that AIDS was “God’s punishment” for homosexuality, that transgender people should be exorcised, and that gay people are “like vampires.” He pleaded guilty to a hate crime harassment charge after distributing the leaflets.

Last year, Kelly was sentenced to 250 hours of community service after sending antigay hate mail to a pro-LGBTQ minister, telling the priest to “hang himself” if he wasn’t going to “repent of his evil.”

In response to Kelly’s being excommunicated, a source tells The Scottish Sun, “If you are launching attacks on people, saying they have no authority, that you take no direction from them, then you are more or less walking away.”

“When you get to that stage, you can’t be too surprised you’re expelled.”