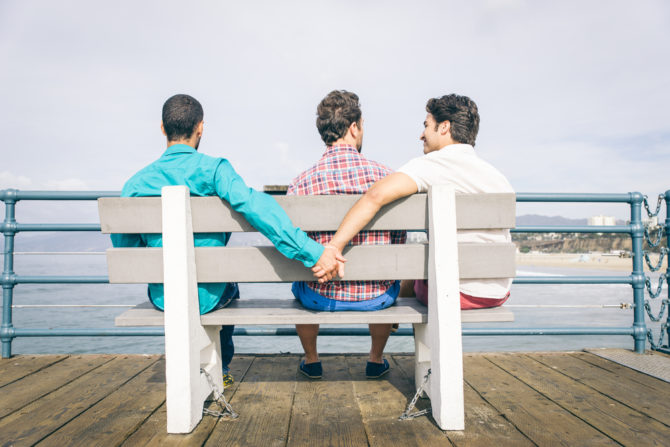 This just in: Cuckolding is having a serious moment right now.

While cuckolding was initially viewed as more of a heterosexual phenomenon, it’s become increasingly popular among gay couples as well.

“I’d long gotten letters from straight couples into cuckolding (usually initiated by the husband),” Savage says, “but none from gay couples until after marriage equality began to gather steam.”

Related: Cuckolding Is On The Up And Up Among Gay Couples

For their study, Savage, Lehmiller and Ley investigated the cuckolding fantasies of both gay and straight couples, including 580 gay men.

So what did the find? Well, it seems gay guys and straight guys view the whole thing a bit differently.

But gay men didn’t see it quite the same way.

“For gay men, cuckolding isn’t quite as taboo because the norm of lifelong monogamy isn’t so strong in the LGBT community,” says Lehmiller. “However, it can still be arousing for a number of other reasons.”

Related: Guy Caught Sleeping With Girlfriend’s Gay Friend: “It Wasn’t Cheating Because It Was With A Guy”

Lehmiller continues, “It’s a sexual desire that can be easily customized to meet a wide range of sexual needs and desires, whether it’s taboo sex, novelty, voyeurism or something else.”

A lot of gay men also said they got turned on just by watching their partner hookup with someone else.

Savage finished with a note of caution:

“The reality of watching your spouse have sex with someone else–or knowing they’re doing it, if you’re not there–is often very different than the fantasy,” he says. “It can dredge up powerful emotions, so take baby steps and keep talking and communicating.”