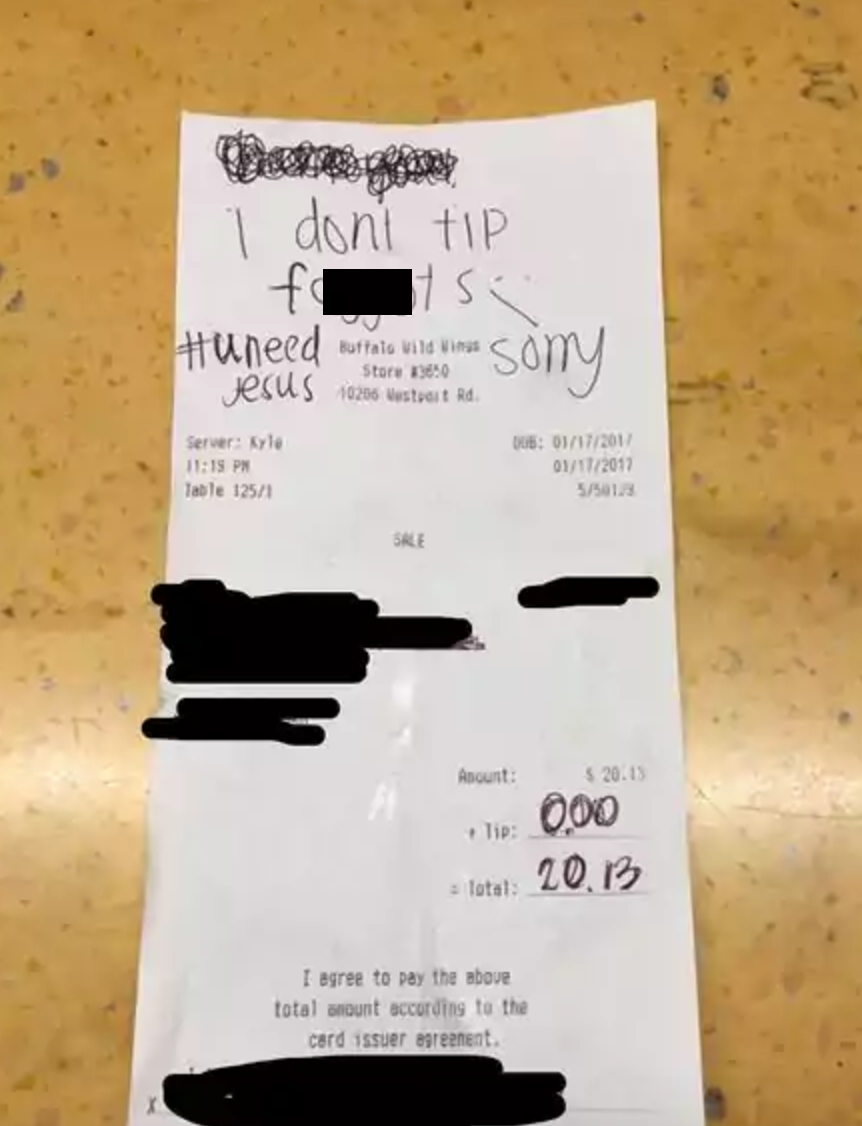 A good rule of thumb while out on a date: notice how that person treats the server, and if they’re overly rude, run.

So, imagine if your date happened to leave an antigay slur for your waiter instead of a tip. It sounds unfathomable, but we’ve written about the phenomenon so many times over the years that it’s become its own sort of miserable micro-trend.

Related: No Tip? IHOP Waitress Finds “Gay Is Wrong!” Written On Her Receipt

The latest example comes from Louisville, Kentucky, where a local server at Buffalo Wild Wings on Westport Road claims he received a homophobic remark on his receipt in lieu of gratuity.

Kyle Griffith says he was waiting on two young girls that night, and it was a typical evening until he went to pick up the check, where he found a handwritten message.

“And it said ‘Sorry I don’t tip fa**ots,’ and then said ‘#UNeedJesus,’ and it just crushed me that someone could say something like that,” Griffith tells WDRB. .

“I depend on those tips to be able to pay my bills and everything else,” he says. “To live, to eat, everything.” Griffith said.

So Griffith decided to post a photo of the receipt on Facebook, though he was gracious enough not to call her out by name.

Related: What This Restaurant Thinks Of Your Fairy Drink Order

“I woke up the next day,” he says, “and saw that it was being shared a whole lot more than I ever thought it would.”

He hopes his story raises awareness about the hate he occasionally faces.

“I want to be able to tell everyone that this is not a lie, that this is truth, this is an everyday happening,” he says. ”It’s an occurrence that … can’t happen any longer. It’s got to stop. The hate has to stop. There’s no reason for it.”

In a statement on Tuesday evening, Buffalo Wild Wings wrote:

We’re disappointed to learn about the comment left on a receipt by a Guest at one of our independently owned franchise locations in Louisville recently. Because Buffalo Wild Wings is about creating a great guest experience, we feel strongly that our restaurant environment needs to be respectful in order to provide the experience that our Guests and Team Members expect and deserve.

Griffith is quick to point out that management “had his back,” which is good to hear, especially since the restaurant came under fire for this 2011 advertisement: 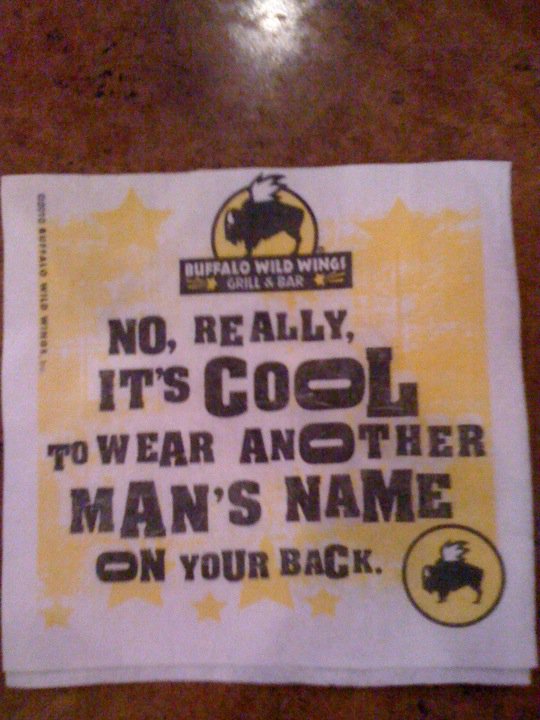 “They told me that if I needed anything I could come and talk to them, so it’s just been amazing outpour of support and love from everybody around,” he says.

And apparently the customer has since apologized.

Related: Lesbian Waitress Receives Nasty Note About Her “Lifestyle” In Place Of Tip