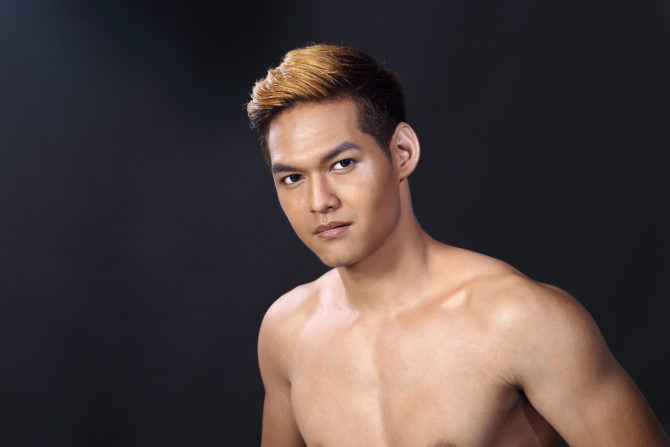 The first time I suspected I would never be one of The Beautiful Men was on a Match.com date about eight years ago.

The guy looked like an ad for every gay club/moisturizing commercial/gut-reducing ad I’ve seen. When I sat down next to him I didn’t think I’d be able to speak. He wore this sexy sweater and wanted me to touch it; yes, the fabric was that good.

Turns out, he made me feel completely at ease and we hit it off big-time, at some point losing all inhibitions in a coffee shop in Chelsea (of course) and sharing a kiss. We had a lot in common and just, you know, “vibed”—a word I use about as often as I online date. We must have been there for a couple of hours, at times laughing till we were red in the face.

I thought, “Maybe I’m too hard on myself. I’m decent-looking, I’m funny, I’m kind. Who wouldn’t want me?”

After we finally left, I got up the nerve to send him a note, saying how much I enjoyed the date and how much I’d like to see him again. He responded, hours later, with a text that said something to the effect of “David, you’re a very sweet and attractive man. However, I would never date you in a million years. Best.”

RELATED: How to deal with the depression that hurts so many older gay men

I’m paraphrasing but that was pretty much the gist of it.

Never one to just let things just go, I asked him why.

“You’re just not right. Nothing personal.”

That quote I remember vividly.

The “beauty” I speak of isn’t all about aesthetics—some of the sexiest men I know wouldn’t fit my definition—it’s a type, a subset of physically attractive men who live in an antiseptic world of the right look, the right home, the right job, the right dog to accent just the right sconces.

If you fret over being ignored by these men or are as susceptible to their charms as I have been guilty of, know that, up close, they’re usually not nearly as sexy as their filters would suggest. It’s taken me a long time to spot one before I get hurt, but quick thinking when it comes to attractive men has never been my strong suit.

The Instagram model I slept with is a favorite lesson-learner. He’s one of those guys with about a million followers whose photos make you believe in God—cause you’re looking at divinity—and spends a lot of time in photos wearing only underwear and looking out the window while sipping coffee. And usually has spiritual words of comfort as a caption. Sigh…

I’d never met Michael in person, but knew he lived in my area via Grindr pics he’d post, mostly supporting his OnlyFans page. I didn’t dare ping him. Out of the blue one night, I get a note asking if he could come over, along with select X-rated photos to seal the deal. He gave specifics as to what he wanted and asked if I was game.

It was heaven until it was hell. The moment he walked in the door he removed his clothes and any inhibitions and went straight into the bedroom. He was full of compliments, lacked any sense of arrogance you might suspect, and, despite this being my house, was the perfect host.

I’m not sure when I realized he was high, but I was the one who felt the crash.

Things got messy—okay, so not the perfect host—and he locked himself in the bathroom for an hour (paranoia, he told me). When I finally got him out and comforted him, he started mad texting friends and saying he was in trouble. He was afraid to walk home, and I volunteered to escort him. Finally, in the middle of the night, he just up and fled.

Drugs happen, and so do bad experiences, so I texted him the next day to make sure he was okay. He told me I was out of his league (I’m assuming that’s what “old and ugly” meant) and to leave him alone. Then he blocked me. Next, his husband (news to me) sent me a Grindr note with a warning to never harass his spouse again. Once again, block!

Today, Michael’s still gathering up Instagram followers, wearing boxer briefs in muscled glory and inspiring others with his words of supportive, inclusive inspiration. If there are cracks in the frame the hashtags hide them well.

Perhaps the prettiest of the pretty shallow was the Beautiful Man who asked me on a date last summer. In this case, I had “met” him on Scruff and was hoping for a hookup. Brad, who looked like he just stepped out of a Nasty Pig Elite modeling session, told me that never, under any circumstances, does he have sex before meeting, so we set a time for dinner.

Cool: He’s old-fashioned. And with professional nudes, to boot.

I probably should have wised-up after he canceled the first time because “I just wasn’t feeling it tonight,” but once again, I was thinking with something other than my brain.

At dinner, Brad downed three glasses of wine (which might have answered one question), and spent the evening telling me how much he hated the Hamptons (“too pretentious”) and Fire Island (“too cliquey”), but loved all of the money he was making at his consulting job—which, yes, he hated. Fabulous friends filled the rest of his stories, and he was quick to mention he was meeting some of them later in the evening. He tuned out when I told him I was a writer and led a pretty simple life, and neither one of us could get the check fast enough.

On the way out, he informed me that I wasn’t boyfriend material—“sorry”—and that, as he stated previously, he had no interest in a hookup. Sex had to be special.

Not two weeks later, I attended an event I’d never experienced until I hit my fifties—a sex party. (Hey, I’ll try anyone once!). No sooner than I had made myself comfortably nude then another invitee showed up—and I think you know where this is headed.

I grabbed the host by his jockstrap and said, “Oh my god, I just had a terrible date with that guy. This is going to be so awkward.” Brad was introduced to the crowd and when it came to me, I said, “Hi. We’ve met.”

“No, I don’t think so. I would have remembered.” If I were wearing pearls, or anything else, I would have clutched them.

Brad, the non-hook-up, relationship-oriented guy, kept on his clothing and circled the crowd. He had that same bored look I remembered from the date until he worked his way back to me. Then I finally saw a smile. Without a word, he stripped down to his c ring and jumped all over me.

I may never understand The Beautiful Men and why they behave the way they do, but at least this last story came with a happy ending.