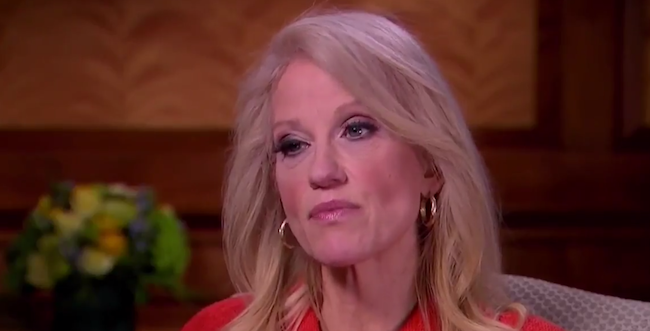 Time to embrace the concept of alternative massacres, and the havoc they wreak.

On Thursday, counselor to the president Kellyanne Conway was interviewed on Chris Matthews’ Hardball, and she used the opportunity to defend Trump’s travel ban affecting Iran, Iraq, Syria, Sudan, Libya, Yemen and Somalia.

At one point, she alluded to two Iraqi refugees who she said were the sole masterminds of “the Bowling Green massacre.”

“Most people don’t know that because it didn’t get covered,” she said.

One of the main reasons there was a media blackout on the Bowling Green massacre is the fact that it didn’t happen. There’s never been a terrorist attack in Bowling Green, Kentucky.

“I bet it’s brand new information to people that President Obama had a six-month ban on the Iraqi refugee program after two Iraqis came here to this country, were radicalized and they were the masterminds behind the Bowling Green massacre,” she said.

.@KellyannePolls says that 2 Iraqi refugees "were the masterminds behind the Bowling Green massacre."
(There was no such massacre.) pic.twitter.com/sD3Nnb5xfE

Conway was referring to a 2011 incident in which two Iraqi nationals were indicted for allegedly having affiliations with IED (Improvised Explosive Device) attacks against American troops in Iraq.

NBC reporter texted me at 632am re:a diff story; never asked what I meant on @Hardball b4 slamming me on @TODAYshow Not cool,not journalism

2/2: yet won’t name him, attack him, get the base 2 descend upon him. Same with MLKJr bust fake story. It’s called class, grace, deep breath

Meanwhile, Twitter has had plenty to say about the gaffe:

I remember the Bowling Green Massacre like it was yesterday. Cause that’s when it was made up

Kellyanne Conway is right. We did not cover the Bowling Green massacre — because it never happened https://t.co/ROp7TQeEjj pic.twitter.com/WduiA3tJKx

Very grateful no one seriously hurt in the Louvre attack …or the (completely fake) Bowling Green Massacre. Please don’t make up attacks.

Maybe nobody showed up to Trump’s inauguration because they all died in the Bowling Green Massacre.

The Bowling Green Massacre affects us all. It shows how casually the Trump Administration will lie to us to justify the unjustifiable.

Please, a moment of alternative silence for the victims of the Bowling Green massacre

Of all US massacres, the Bowling Green Massacre was truly caused by mental illness.