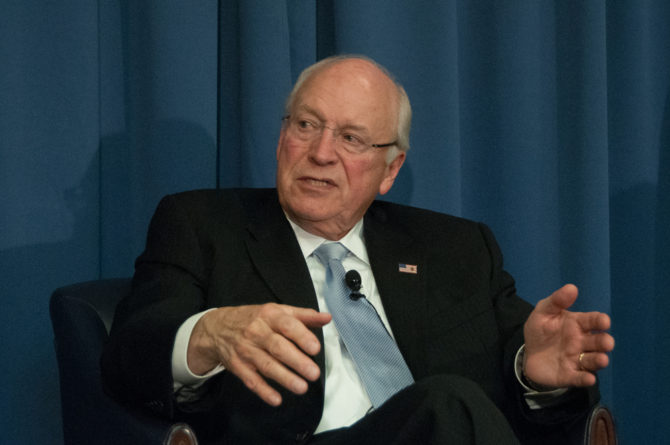 Former Vice President Dick Cheney is reportedly very, very, very worried about the direction the Republican Party is going. And just like that, irony died.

Speaking at an event hosted by Aspen Institute, the ex-VP’s daughter, Rep. Liz Cheney, revealed to the audience that her 80-year-old father isn’t just “troubled,” but “deeply troubled” by how far the GOP has fallen since his halcyon days of overseeing the country’s torture program.

Liz Cheney has been one of the most vocal GOP critics of Donald Trump’s failed campaign to overturn the 2020 election results and it has cost her greatly. In addition to be ousted from her leadership role in the House, she is persona non grata among her colleagues, who frequently attack her in the media.

Earlier this year, she and archenemy Rep. Matt Gaetz got into a heated war with words that ultimately resulted in Cheney making a homophobic jab at the congressman. (Both Cheney and Gaetz have 0% ratings with the HRC.)

After Cheney shared her father’s concerns about the state of the Republican Party and the nation, his name began trending on Twitter.

America’s original Axis of Evil, Dick Cheney, is troubled that the Republican Party is just too evil, according to daughter Liz Cheney.

“I am deeply troubled by Frankenstein’s monster”

The Republican Party is too evil for Dick Cheney.

Let that sink in.

When the Republican party starts to lose Dick Cheney…

I’m not sure how to finish that sentence or if I even want to.

Hey remember that one time Dick Cheney “accidentally” shot a guy with a shotgun?

I’m deeply troubled with Dick Cheney not being in jail, I guess we all have our issues

Dick Cheney is “deeply troubled” with what the Republican Party is becoming.

Maybe he should invite it on a hunting trip…