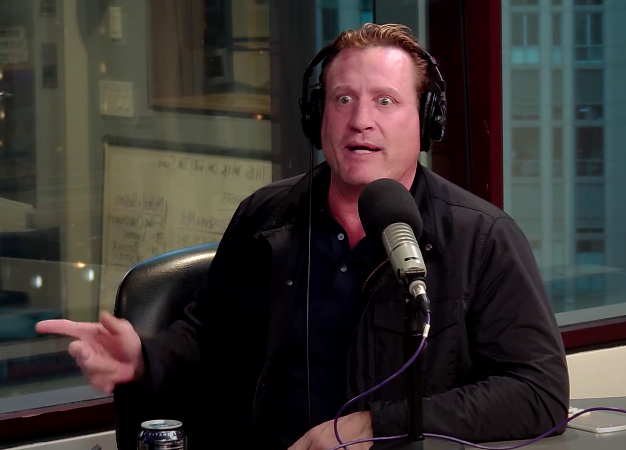 Fired NBC Sports commentator Jeremy Roenick has just filed a lawsuit against his former employer for wrongful termination, saying he was unfairly targeted for being… straight?

The former NHL star went on to talk about he and his wife had recently been on vacation with Tappen when someone at the pool asked if they were a thruple.

“I play it off like we’re going to bed together every night, the three of us,” Roenick said. “If it really came to fruition, that would really be good, but it’s never going to happen.”

He then talked about how his wife and Tappen looked “f*ckin’ smokin’” while swimming at the pool.

Roenick eventually apologized for the remarks, but he was still suspended and later fired by the network.

Now, in a lawsuit filed in New York last week, the 50-year-old claims he was unfairly treated, drawing an example from the 2018 Winter Olympics, when NBC figure skating commentator Johnny Weir also used vulgar language and was not reprimanded for it.

The lawsuit states that Weir used “a vulgar term for a woman’s groin and joked about a sexual affair” while talking to fellow commentator Tara Lipinski about Olympic bronze medalist Bradie Tennell. When Roenick mentioned the remarks to NBC Sports executive Sam Flood, he says Flood responded by saying Weir “is gay and can say whatever.”

“To date, there has not been any remedial action taken against Lipinski or Weir,” the lawsuit says..

Statement from @KathrynTappen on @Jeremy_Roenick's comments (provided by NBC Sports PR): “While Jeremy and I continue to be good friends, what he said was unacceptable, especially among workplace colleagues. I do not condone his comments.” https://t.co/fiYp10rK9t

Roenick says that he believes he was unfairly fired “because of his sex and sexual orientation.” He adds that his support for Donald Trump in 2016 may have also played a factor in his termination.

In a statement, Roenick’s attorney, Scott William Clark, said: “Mr. Roenick is the victim of double standards wrongfully asserted against him. A person’s career should not be thrown away by a company as Mr. Roenick’s career was with NBC. We are confident that the evidence that will be brought to light from this lawsuit will reveal the rampant disregard of Mr. Roenick’s rights.”

NBC Sports has declined to comment on the lawsuit.