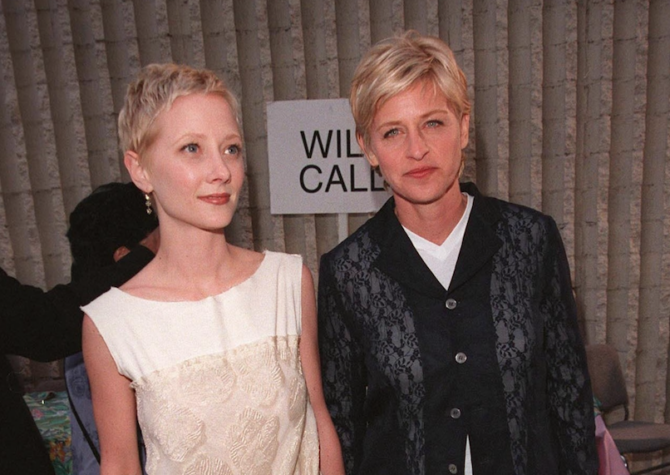 Ellen DeGeneres commented this week on the near-fatal car crash of her ex-partner, Anne Heche.

A paparazzi photographer in Santa Barbara asked the former daytime talkshow host about Heche’s current state and whether the two have stayed in touch.

“No, have not. We’re not in touch with each other, so I wouldn’t know,” DeGeneres replied.

Asked if she’d be giving well-wishes for Heche’s recovery, DeGeneres responded, “I don’t want anyone to be hurt.”

“It was quite a dangerous accident that happened, wasn’t it?” the photographer asked.

“Sure was,” DeGeneres said.

Related: Anne Heche has some things to say about her relationship with Ellen and being “blacklisted”

Heche was driving at 90-mph when she crashed her blue Mini Cooper into a two-story home in Los Angeles on Friday, August 5th. The vehicle caught fire, which destroyed the home and required 60 firefighters to extinguish. The actress is currently in a coma.

Police obtained a warrant to draw Heche’s blood to test for possible intoxication. On Wednesday it was reported that no alcohol was in her system at the time of the accident, but that the actress had been using cocaine.

“At this time, Anne is in extreme critical condition,” Heche’s rep told Deadline on Monday. “She has a significant pulmonary injury requiring mechanical ventilation and burns that require surgical intervention.”

“She is in a coma and has not regained consciousness since shortly after the accident,” they added.

A source told Entertainment Tonight that Heche’s family “is on pins and needles, just praying.”

The the tenant of the home that was destroyed, Lynne Mishele, “is devastated by what happened to her on Friday — not only because she and her pets almost lost their lives, but because all of her property, including items of profound sentimental value, were destroyed,” her lawyer said in a statement to ET.