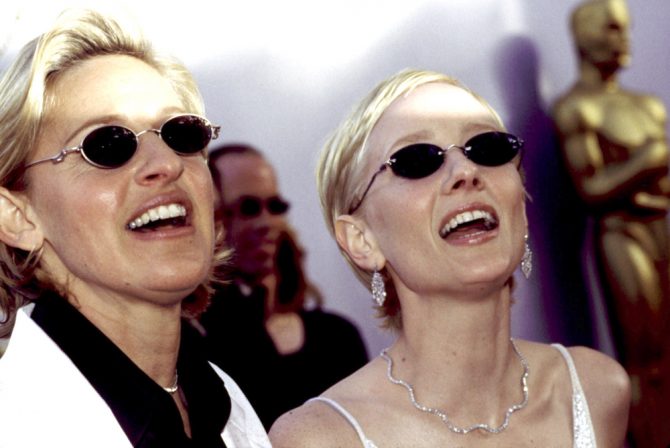 Anne Heche doesn’t often speak about her romance with Ellen Degeneres that dominated the headlines in the late ’90s and early ’00s, but in a recent interview with Page Six, the 52-year-old is opening up about the partnership that she says got her “blacklisted” from Hollywood.

Heche describes the relationship, which lasted from 1997 to 2000, as “a moment in my life when I was given the glory of being able to stand up for what I believe in.”

Unfortunately, it came with a cost. Because being in a same-sex relationship in Hollywood at that time ended up sidelining her career, which had been on the up-and-up before she brought Degeneres as her date to the 1997 premiere of Volcano.

Heche is probably right that her relationship with Degeneres did harm to her career. Of course, so did that string of high profile interviews she did during which she talked about living in a fantasy world called the “Fourth Dimension” and having an alter ego named Celestia, who was Jesus’ half-sister and who had contacts with extraterrestrial life forms. But we digress.

One of the major studio films Heche almost lost out on was Six Days, Seven Nights starring Harrison Ford. After her relationship with Degeneres became publicly known, she says the studio questioned whether she should star anymore.

As a result, Heche almost backed out. Until Ford called her up and talked her out of quitting.

“That is why Harrison Ford is my hero,” Heche recalls. “To stand behind me at such a time when the force of what I was standing up for could have been toppled.”

Despite all the negative things that came with being in a same-sex relationship in Hollywood in the late ’90s and early ’00s, Heche believes it wasn’t all in vain.

“Those repercussions that happened, are, to me, what has created a part of the change,” she says. “I’m a part of it. It is a badge of honor.”

Up next, Heche will star in the disaster film “13 Minutes,” which she says “tackles social issues in a disaster movie.” It will be released in theaters October 29 and on demand November 19.