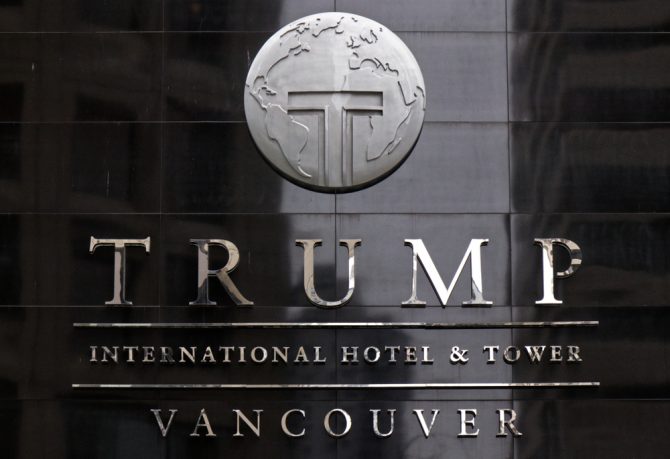 Over a year after the Trump International Hotel & Tower Vancouver declared bankruptcy and was forced to close, the word “TRUMP” is still emblazoned in capital letters over the property’s main entrance. But not for much longer.

The ex-president’s 147-room (+217 condominium homes) luxury hotel shut down in August 2020, less than four years after opening. Now, it’s under new management and being rebranded as “1151 Residences,” which means his name will soon be scrubbed from the facade.

Also coming down is all the Trump branding inside the building, like the “Spa by Ivanka” sign that can be seen near the front doors of the hotel.

The doors to one of the most exclusive hotels in downtown Vancouver! pic.twitter.com/DsPb6lpjoE

The 616-ft-tall, 63-storey tower, which is the second tallest building in Vancouver, is expected to be completely rid of all mention of Trump sometime in 2022. The property will then undergo an extensive rebranding before reopening later in the year.

This is the second one of Trump’s Vancouver businesses to bite the dust.

In 2018, the former Trump Hotel’s Drai’s Vancouver, an 8,000-square-foot pool nightclub, shuttered after being open barely a year and failing to deliver on its promise to offer “the leading nightlife experience in Vancouver.”

Most people find it embarrassing. The Trump name is a stain on Vancouver

In other Trump Hotels news, a recent investigation published by Forbes digs into just how far Trump’s failing D.C. property went to cash in on the January 6 insurrection.

Around that time, nightly rates at the hotel skyrocketed from $476 to $1,999, then to $3,600, then to $8,000. The day after the insurrection, the director of the Trump hotel bragged that the hotel’s in-room dining  was making record-breaking sales.

Who all was in attendance? Guests included insiders working to overturn the election from the “war room” down the block at the Willard hotel—as well as the president’s two eldest sons, Don Jr. and Eric. Other Trump partisans showed up too, such as former National Security Adviser Michael Flynn and Juan O. Savin, a Qanon influencer some followers believe is really John F. Kennedy Jr. (He is not.)