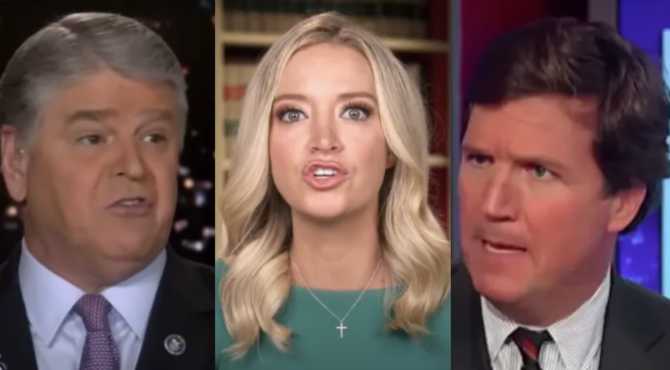 An employee group at Fox Corp. composed of LGBTQ individuals has spoken out about the homophobic and transphobic talking points on the Fox News Channel.

A message posted earlier this month to the group’s company-wide Slack channel reads: “Fox Pride denounces statements made regarding sexual orientation and gender identity on FOX News in the past week. While the internal support and resources Fox Corp. offers to LGBTQ+ employees are amazing and supportive, the public facing messaging and rhetoric is the opposite. We find it disheartening and a step backward in the acceptance of the LGBTQ+ community.”

Fox Corp. is the parent company of brands like Fox Sports, Fox TV and Fox Entertainment, but the anti-LGBTQ programming on Fox News is casting a long shadow over the media giant.

Of course, Fox News hosts like Tucker Carlson, Sean Hannity, Mark Levin and Laura Ingraham have long histories of airing anti-LGBTQ messages, but the rhetoric has intensified in the wake of Florida’s recently enacted “Don’t Say Gay” law. Supporters of the law have regularly labeled critics as pedophiles who want to groom children. Playwright David Mamet appeared on the network and falsely claimed male teachers are “inclined” to pedophilia.

The network has also denied the existence of transgender people in its repeated attacks on trans female athletes, and called a New Jersey proposal for LGBTQ-inclusive education a form of “psychological torture.”

“FOX News is one of the most watched cable networks in the nation and we must be mindful that the impact these words have on the LGBTQ+ community — especially youth,” the Slack message continues. “LGBTQ+ youth have the highest rate of suicide and words matter. Hateful words and generalizations about sexual orientation and gender identity have a direct impact on people’s lives. We are working to address and make sure our voices are heard.”

A Fox Corp. spokesperson responded to the Daily Beast: “We are fully committed to freedom of speech and freedom of the press because we know these precious rights as well as diversity of thought and opinion benefit us all.”

The message follows the news that the Human Rights Campaign has removed Fox Corp. from its list of top employers for LGBTQ people. “Fox News has a history of sharing misinformation and disinformation about the LGBTQ+ community,” HRC Senior Press Secretary Aryn Fields said in a statement. “We know from our own research, which we put out earlier this week, what their disinformation and misinformation means for the LGBTQ+ community: perpetuating stigma and marginalization of transgender and non-binary people. At a time when transgender people — especially transgender children — are under attack in statehouses across the country, rhetoric has real consequences.”

“We can no longer allow Fox Corporation to maintain its score if Fox News personalities and contributors continue to deny the existence of transgender people, minimize the violence transgender individuals face, refer to parents of LGBTQ+ youth as perverts, or equate leaders of LGBTQ+ diversity and inclusions efforts with sex offenders,” the statement continues. “Each of these actions happened in the last 72 hours. Enough is enough.”

A “Fox insider” added to the Beast: “The thing is, internally, the company values diversity. They invest in it and foster it from a management perspective. The on-air Fox News product, however, spits in the face of it. The employees are getting sick of it.”