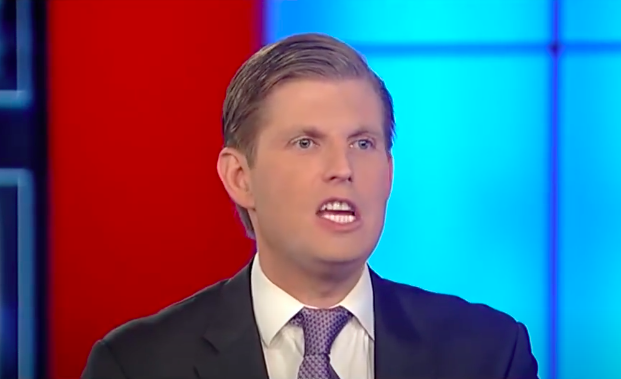 The apple doesn’t fall far from the tree, and in this case, the apple is trying really hard to roll even closer.

Eric Trump sat down for an interview on Fox News on Tuesday night, where he dusted off a pretty weird line from father Donald’s egomaniacal handbook. It didn’t land well.

As Eric would have everyone believe, people keep approaching him on the street, embracing him while weeping. “Literally, sometimes Sean,” he said, “with tears in their eyes,” as they gush about how much they miss former President Donald Trump.

Eric Trump says random people in the street hug him with tears in their eyes and tell him how much they miss his father pic.twitter.com/EF8cKSmhmI

Folks were quick to recall the former president would often tell the exact same story.

In 2018, another similar story: “He was a strong, tough guy, and he was crying. He said, ‘Mr. President, thank you for saving America. I’m telling you, that man, he was tough. I don’t think he cried when he was a baby.”

And in 2017, Trump would often speak of ranchers weeping behind him at an event. Footage of the speech does not show any tears being shed.

Eric’s attempt to rehash the weeping Trumpers story did not go unnoticed:

A) sure
B) did you check for your wallet afterwards @erictrump?
C) the fuq you ever walk on the street past random people pic.twitter.com/DyjT4nszNE

It sounds far more ridiculous and pathetic when the son does this shtick. https://t.co/WZZWYKuHmG

do they address him as "sir" as well? ? https://t.co/BxJogshbsL

This is such a blatant lie.

1. The only people missing your deadbeat dad are you, Jr., and Rudy.
2. NO ONE would hug you….(not even daddy.) https://t.co/gqcx5bUfrV

Hooey. Was this "mythical" street a walking path in Mar-A-Lago? Also, @EricTrump's own daddy doesn't hug him, let alone random strangers.
Why would your Secret Service detail allow strangers to approach you, Eric? https://t.co/95E9P4d0jG