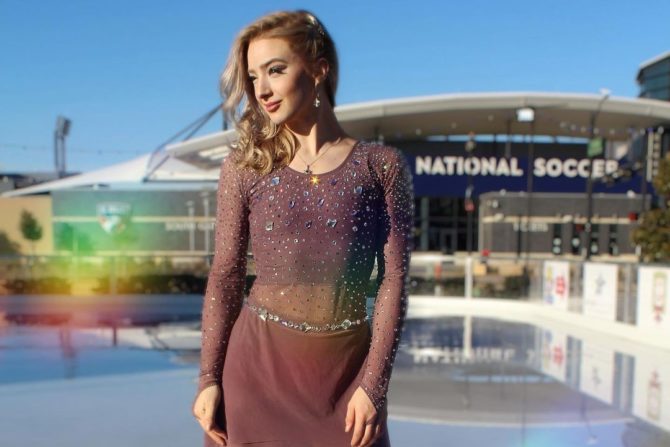 Sometime in the mid-2010s, a therapist brushed off Amber Glenn’s burgeoning sexuality — telling the figure skater, then 15 years old, that she had “enough to deal with” besides her queer curiosity.

So, Glenn forged ahead without that therapist’s help, researching her sexuality online before kissing a girl for the first time at age 17 and feeling the same headiness she felt when kissing a boy, according to her recent profile in The Guardian.

(Around the same time as that revelatory liplock, Glenn’s sister accidentally outed her to their mom, but Mom was only surprised that Glenn had time for dating!)

Two years later, Glenn publicly came out in a 2019 Dallas Voice article that hailed her as “the only openly queer Ladies figure skater competing on Team USA.”

Glenn told the publication that she struggled with the fear of not being accepted. “Being perceived as [going through] ‘just a phase’ or [being] ‘indecisive’ is a common thing for bisexual/pansexual women. I don’t want to shove my sexuality in people’s faces, but I also don’t want to hide who I am.”

And these days, she calls herself pansexual, lending visibility to an oft-misunderstood identity. “‘Bisexual’ is the go-to term that everyone understands and is comfortable with,” she told The Guardian. “But someone can be born a female and identify as a male or the other way around. I’m attracted to the person [first]; not what’s underneath their clothes. Pansexuals are gender-blind.”

Along the way, this young skater from Plano, Texas, has become a rising star on the rink, earning the silver medal at the 2021 U.S. Figure Skating Championships in January. That second-place win made Glenn the first LGBTQ+ woman medalist to take the podium since the competition began more than a century ago, and it got her a first-alternate slot in March’s 2021 World Figure Skating Championships. Now she has her sights set on the 2022 Winter Olympics.

And Glenn has a good shot at Olympic glory, especially now that she’s living out and proud.

“She’s honed that last piece of the puzzle, which is bringing, under pressure, to the ice that skater that we get to see every day in practice: that brilliant, light, charismatic skater,” Tim LeDuc, Glenn’s mentor and another openly queer skater, told The Guardian.

“She’s more in tune with herself. She’s more confident, and she’s just really able to bring all that she is to the competition stage now, which is so fun to watch.”

We’re proud of Glenn for being self-starter with her sexuality, putting the spotlight on pansexuality, and making history at the championships!