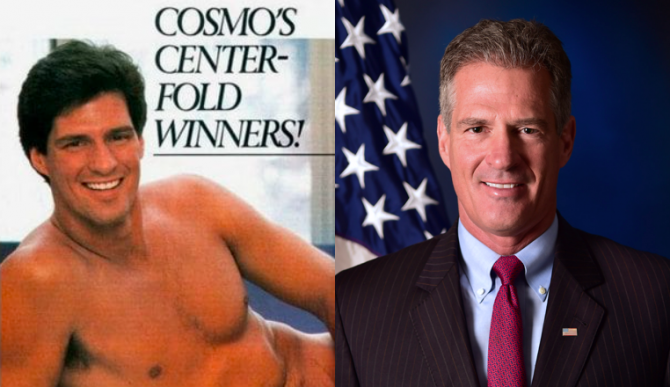 The last we heard from Scott Brown, the former nude centerfold model/amateur rockstar/one-term Massachusetts senator, was about five years ago when he said the Pulse shooting wasn’t a targeted attack against LGBTQ people.

“I don’t identify the people who were murdered as from a particular class of people,” Brown said during an appearance on Herald Radio.

It was a common line used by Republicans back then to discount the victims by suggesting the massacre wasn’t a homophobic hate crime, even though it happened at a gay club and almost everyone killed was LGBTQ.

Since then, Brown, a longtime opponent of LGBTQ equality, has mostly laid low. But get ready! Because word on the street is he’s eyeing a political comeback 10 years after having his ass handed to him by Elizabeth Warren, when she beat him by a whopping eight points, making him not only a one-term U.S. Senator but the only incumbent Senator to lose in the 2012 general election.

Seven months ago, Brown accepted a job as president and dean of New England Law School in Boston, declaring himself “disgusted with politics.” But this week, the 61-year-old did a complete 180 and announced he was leaving the school and quitting his rock band after determining it was “time to get back in the political arena and help re-build our party.”

Enjoyed my time as Dean, loving life as a musician @sbrowndiplomats, but now it’s time to get back in the political arena and help re-build our party: https://t.co/9MrQUSnjhT #nhpolitics

Brown didn’t say exactly how he plans to help rebuild the Republican party, however.

He no longer lives in Massachusetts, so he’s probably not looking to reclaim his old Senate seat, not that he’d have any chance at beating Warren, who isn’t up for reelection for another three years anyway.

Instead, he’s taken up residency in New Hampshire, leading many to wonder if perhaps he’s eyeing Gov. Chris Sununu’s job.

Sununu has long been a GOP favorite to challenge the U.S. Senate against incumbent Democrat Maggie Hassan in 2022. If he were to do so, that would give Brown an opening to possibly replace him as governor.

Or Brown could challenge Hassan himself, although some GOP strategists say his closeness to Donald Trump could hurt his chances. (Brown was Trump’s U.S. ambassador to New Zealand and Samoa from 2017 to 2020.)

Then there’s the possibility that he’s eyeing a 2024 run for president, which would be an even bigger longshot given his demonstrated inability to win elections. (In addition to losing to Warren in 2012, he also ran an unsuccessful campaign for a U.S. Senate seat representing New Hampshire in 2014.)

It remains to be seen what Brown has up his sleeve, but whatever it is will doubtless involve lots of buffoonery and zero success.