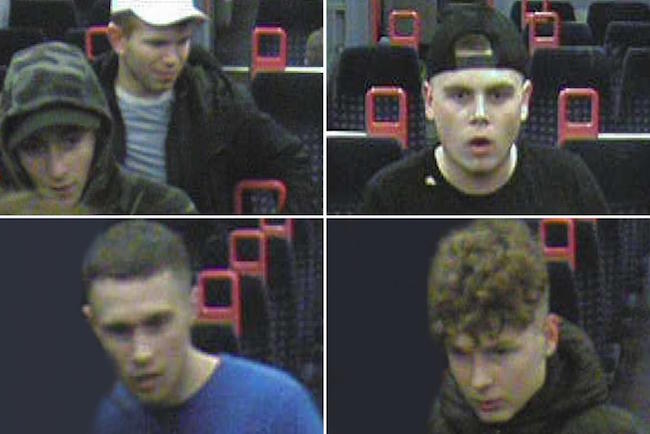 A gay couple in London faced a horrifying attack on a London-bound train from Reading, after they were pounced upon by a group of four men.

35-year-old Phil Poole and his boyfriend Zbynek Zatloukal, 26, are hoping someone will be able to identify the men, who attacked them around 1:05am on February 15th.

Talking to The Standard, Poole alleges the group yelled homophobic slurs at his boyfriend while Poole slept on his shoulder.

The couple had missed their stop at Maidenhead.

Poole says he was abruptly awoken near Ealing Broadway by a punch to the face, and the attack left him with severe cuts and bruises.

He was reportedly knocked unconscious in the brawl, which found both men kicked and hit repeatedly while trying to escape their attackers.

Zatloukal is suffering a suspected broken eye and had both front teeth knocked out.

Police have released crystal-clear CCTV stills of four people they want to question regarding the attack, which took place on a Reading to London Paddington train.

“This was a very nasty assault committed by a group of men who attacked two other men while they were sleeping on the train.”

“The victims believe the motivation for the attack was that the offenders thought they were gay.”

“I can’t really remember much about what happened because I was in such shock when I woke up,” Mr. Poole tells The Standard.

“I managed to get up and stumble down the carriageway but then they followed me.

“I’m not a violent person at all. I’ve never even been punched so I didn’t even know how to defend myself.”

“Hate crimes such as this will absolutely not be tolerated by British Transport Police,” Taylor says.

“I would like to speak to anyone who recognizes the men shown in the CCTV images as they may have information which could help with the investigation.”