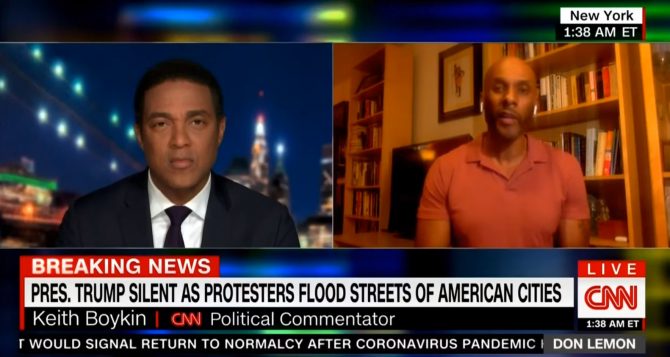 CNN contributor and journalist Keith Boykin has taken to the airwaves to discuss his recent arrest at a Black Lives Matter protest. Police arrested Boykin while documenting the protest and was held for six hours without being charged.

Boykin joined Don Lemon on May 31 to discuss the ordeal, which saw him handcuffed with zip ties and packed in with a group of protestors in violation of COVID-19 distancing protocols.

“I was watching the Black Lives Matter protests going down the street was mostly almost entirely peaceful,” Boykin told Lemon. Boykin attended the protest on May 30 in New York City. “I was in front of the protesters with my camera so I could video and take photos. And the police came.”

“I said, ‘I’m with the press,’” Boykin continued. “They walked by me, but then they turned around and they arrested me anyway. I asked, ‘why am I being arrested?’ and they said, ‘well, you’re blocking the highway.'”

Related: Lady Gaga on George Floyd protests: “We MUST show our love for the black community”

“Now mind you, I wasn’t blocking the highway, because the police and the protesters were blocking the highway and I was in between the two of them. I was simply photographing what was taking place and documenting what was happening. They could have just said, ‘you need to move off the highway or you going to be arrested.’ They didn’t bother to do that. They just arrested me. The police have too much power.”

Boykin went on to describe how police handcuffed him and left him in a hot, crowded paddywagon before driving him to the police station. Officers held him in a cell with more than thirty other protestors before releasing him with a mere court summons for blocking the highway. In all, the ordeal took six hours.

“So often the police actually don’t de-escelate, but they make matters worse, and that’s what people are protesting about,” Boykin added. “That’s why they’re so upset about George Floyd right now. It saddens me there’s been a horrible week for everybody in America.”

Protests against the death of George Floyd, who died in police custody in Minneapolis, and against nationwide police brutality, continue.