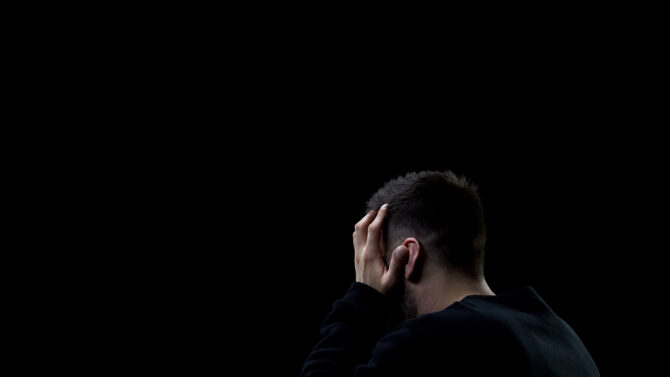 Who among us hasn’t looked in the mirror and wished something was different? But it might be good practice to start accepting the things we can’t change, so to speak, especially since poor body image can be detrimental to our mental health.

Speaking to The Guardian in 2019, a spokesperson for the Mental Health Foundation cited research suggesting that “higher body dissatisfaction is associated with poorer quality of life, psychological distress, and risk of unhealthy eating behaviors and eating disorders.”

Meanwhile, Josh Bradlow, a spokesperson for the LGBTQ+ equality organization Stonewall, told the newspaper that “stereotypical assumptions and beliefs about masculinity and femininity can be deeply damaging for how anyone—especially LGBT people—see themselves and their bodies.”

At least these insecurities seem to fall away with age. In a recent poll of more than four thousand UK adults, 57 percent of 18- to 24-year-olds admitted to body-image anxieties, though that number fell to 30 percent for 45- to 54-year-olds and 20 percent for those 55 and over.

In any case, users of Reddit’s r/askgaybros subreddit recently listed the attributes that guys shouldn’t feel insecure about, and their responses might put you at ease. Scroll down to read some of those comments—which have been edited for readability—and let’s all try to be a little kinder to our bodies and everyone else’s.

“After all, there’s nothing you can do about it.”

“It’s obvious, yet it took years for me to finally get that and get over it.”

“Most guys are not big.”

“Seeing someone just because of their d*ck size is incredibly dehumanizing. If they want to f*ck because you’ve got a big d*ck, they’re just using you as an object. If they think you’re ‘too small,’ that’s just being treated as inferior.”

“I’ve always hated my own gut, and I’m still trying to get a small one through proper diet and exercise, but whenever I see a top with a gut or six-pack, I don’t mind. I prefer if they don’t, ‘cause it means we can eat out more and have days of just doing nothing together.”

“So, two things: A) Guys with guts tend to also have asses, which is my favorite part of the body, even as a bottom. B) This is going to sound weird, but I like the feeling of a gut touching my gut [during] missionary. I don’t know if it’s more comfortable or just the skin-on-skin contact, but something about it makes it very hot for me.”

“This is such a young person thing. The hottest guy I hooked up with had a gut. He was just so manly and hot and thick. When we are young, being in shape matters, and to an extent, it does in general, but I think we learn to be a little more open-minded as we get older. Well, some of us do. And if we don’t, that’s OK.”

“Lots of people find that shit attractive AF, myself included. Can’t stand the gays that shame others just because of body hair.”

“My friend has this problem. Super cute lil’ brown twink, hairy as f*ck, though. I always thought it was kinda hot, even though I preferred smooth. Not only was it not a dealbreaker, there was something about it that was attractive.”

“Bald is just as sexy as a full head of hair.”

“Yup, and attempting to hide going bald with haircuts like a combover is actually pretty unattractive.”

“Don’t make fun of people for it. Literally not your fault and limited stuff can be done about it.”

“Sometimes they just happen during puberty, and even people who are fit their entire lives can have them.”

Related: Guys of all shapes and sizes are striking poses for this sexy, must-see photo series

“Nothing less attractive than when you’re trying to get it on and they’re reluctant to take their clothes off or let you see them naked. Like, dude, I’ve agreed to have sex with you. I clearly find you at least a little bit attractive.”

“You’re not less of a man just because you show emotions or have feminine character traits. That goes for guys in general.”

“One thing I love about being gay, considering i’ll be out of the closet at one point, is that I don’t have to feel ashamed when I lose my sh*t over cute stuff or when i’m being emotional or too soft. people might just be like, ‘Yeah, he’s like that

‘cause he’s gay,’ which seems like an allowance to be like that, lol. But yeah, it shouldn’t be a topic anyways. We should feel good with how we are in either way, gay or not.”