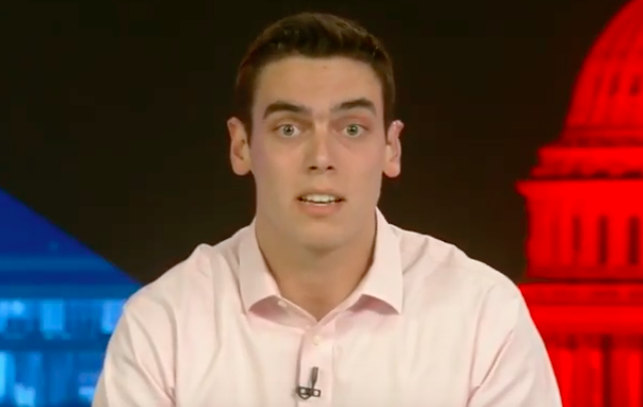 This just in: Brad Polumbo is not into kink. No ma’am! If it’s kinky, he wants absolutely, positively nothing to do with it!

In a scathing new op-ed published by the Washington Examiner that somehow manages to be both self-righteous and self-loathing at once, Polumbo accuses anyone who attended last weekend’s Mid-Atlantic Leather Weekend in Washington, D.C. of “giving us all a bad name and annihilating what progress we’ve made.”

“Homosexuals were wrongly maligned for centuries as perverts and deviants,” Polumbo writes. “Modern left-wing gay people seem determined to keep up the public displays of debauchery that keep this stereotype alive.”

Polumbo, who says his idea of a fun night out is going to a “fancy Mexican joint” with his boyfriend and then watching Game of Thrones, goes on to say that gay kinksters “flout their deviancy in public” and “flaunt perversion” while giving credence to “bad faulty stereotypes.”

As for Mid-Atlantic Leather Weekend, in general, Polumbo calls that whole thing “bizarre,” “disgusting,” and “eminently harmful to gay progress and acceptance.”

“It’s an affront to gay acceptance, the fight for which was actually rooted in an appeal to family values and bourgeois norms,” he rages. “The fight for gay marriage in the court of public opinion was, in part, won through the sentiment that gay people should have the same right to marry and be miserable as everybody else.”

We think that’s supposed to be a joke, but with this guy it’s hard to tell.

I saw the hottest men all day at the @mrsleather booth.

Polumbo, whose favorite flavor of ice cream is no doubt vanilla, believes that progress is made “by showing people that real-life gay people tend to be as boring and domestic as anyone else” and not by wearing leather jock straps in public.

He concludes his rant with one final sweeping generalization about his peers: by accusing anyone who attended the Mid-Atlantic Leather Weekend of seeking to “exploit society’s growing tolerance by mixing in their affinity for debauchery with the never-ending LGBTQIA2+ (and so on it grows …) acronym and loosely defined ‘community.'”

“The last way to remedy the fact that some segments of society still think our lifestyles are immoral is to flaunt perversion proudly and conflate it with all gay people.”

Here’s hoping nobody conflates all gay people with this guy.