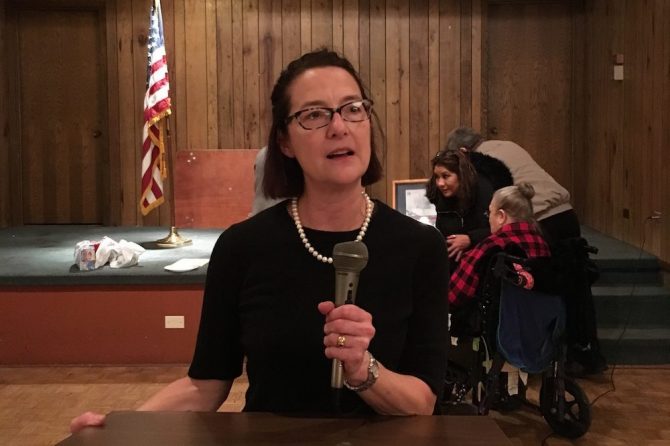 Rep. Amy Grant of Illinois is struggling to do damage control after she was caught on tape blasting her Democratic opponent for being too Black, too gay, and too “crazy” for public service.

Grant is a Republican running against Democrat Ken Mejia-Beal, an openly gay Black man. In a recorded phone call with a potential donor that leaked on Monday, she was heard making vile remarks about Mejia-Beal’s identity and questioning his mental health.

After apologizing for the comments in a statement issued Monday, Grant sat down with the Editorial Board of the Daily Herald yesterday to talk things out some more and–surprise!–she somehow managed to paint herself out to be the victim.

During the meeting, Karen, er, Grant admitted that she messed up by making the racist and homophobic remarks, but she swore that’s not the type of person she is, and it really, really hurts her feelings that people think otherwise.

“I made a very clumsy and insensitive statement that does not reflect how I feel about my colleagues and any candidates,” Grant said. “My faith is part of my daily life, and hearing those words calling me ‘racist’ rocks me to my core because that’s not who I am.”

“They’re accusing me of being racist and I’m not racist.”

Well, you know what they say. The worst thing you can call a racist… is racist.

Grant also said she never intended to suggest being a member of the “LGBT community is something that would hamper a person’s ability to run for state [representative].”

Then she insisted that, despite what everyone heard her say in the recordings, she simply doesn’t have “the type of personality” to be hateful, self-righteous, or judgmental (she’s a Sunday school teacher, after all!), and she hopes Mejia-Beal will accept her apology.

“I just don’t have the type of personality that would look at another person and say, ‘Oh, you’re not just perfectly right, so I’m going to disparage you,'” Grant said. “If I hurt his feelings, I am very sorry.”

But Mejia-Beal has already called B.S. on Grant’s apology, saying all she did was leave him a voicemail reciting the same exact statement she issued publicly on Monday before hanging up the phone.

“Where is Representative Grant’s apology to those who hear her comments and wonder if they fit into her vision of our community?” he continued. “Where is the apology to all whose faith calls them to love their neighbors as themselves?”

My statement on the bigoted comments made by Amy Grant : pic.twitter.com/6rgz52tcBC

Related: Republican lawmaker trashes her opponent for being too gay and Black in leaked recordings