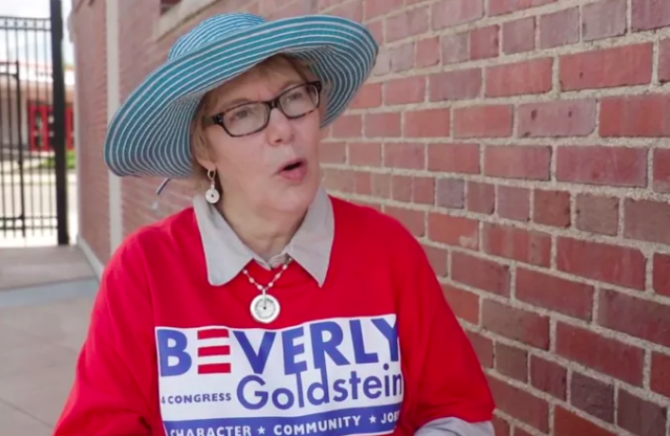 Last week, the 70-year-old self-proclaimed “MAGA candidate” tweeted some bizarro claim that the only reason a new non-discrimination law protecting LGBTQ people passed in Ohio was because black people in Cleveland are illiterate and don’t attend weekly worship services. 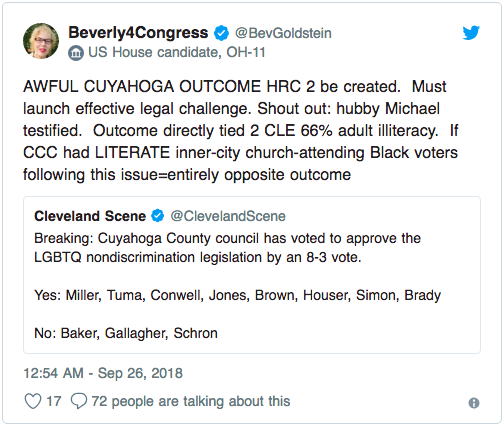 Goldstein is running against black Congresswoman Marcia Fudge, who wasted no time putting out a short statement saying the tweet was “ill-informed, racist and homophobic” before adding she wouldn’t dignify it with any further response.

Meanwhile, Goldstein’s husband, attorney Michael Goldstein, doubled down on his wife’s racism when he told Cleveland.com:

If most of them understood that this ordinance would allow transgender males, or sex offenders who masquerade as transgender males, to use women’s bathrooms regularly used by mothers and daughters, thereby endangering the safety of girls and women, they probably would have brought pressure to bear on their elected county representatives not to bring the resolution in the first place. But those who cannot read cannot be expected to know about the negative effects of the resolution.

Just to be clear: By “them” and “they” and “those”, Mr. Goldstein is referring to illiterate black people who don’t go to church.

The next day, in a presumed effort to prove she’s not racist, Goldstein posted a picture of herself with four black security guards at the National Action Network Midwest Conference:

Then she pivoted and posted some nonsense about “bathroom safety”:

3. When implementation rises to the level of ENDANGERMENT of others, I will oppose such ordinances, laws and regulations 100% of the time.

Take it to the bank??(2/2) pic.twitter.com/InrqwfhTmp

When all else fails, blame trans people.

Important to note: This is the second time Goldstein has challenged Fudge. The last time, Fudge won in a landslide victory with 80.3 percent of the vote.