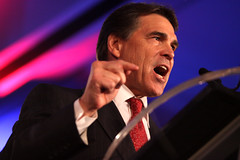 Snow White and the seven dwarfs (aka the GOP presidential field) met at the Ronald Reagan library in Simi Valley, CA, Wednesday night and–surprise!–they didn’t have anything bad to say about gays. Of course, that’s only because the moderators, NBC’s Brian Williams and Politico’s John Harris, didn’t bother to ask a single question about marriage equality, DADT, or anything remotely gay related. Always good to know how the national media ranks the importance of our issues.
Appearing on stage hoping for the ghost of the Gipper to alight with his blessing were Michele Bachmann, Herman Cain, Jon Huntsman, Newt Gingrich, Ron Paul, Rick Perry, Mitt Romney and Rick Santorum. However, the punditocracy had concluded in advance that the debate was about Perry and Romney, so the bulk of the questions were directed at them, with each firing back at the other, largely on economic issues.

Romney, who waffles so much that he uses maple syrup for cologne, assured backers that his experience made him well qualified to be president, even as he repudiates everything he’s ever done or said. Perry, who is George W. Bush without the brains, stood proudly on his record of executing more than 200 inmates, even if they night have been innocent.

As for Michele “Crazy Eyes” Bachmann, the debate was an object lesson in media attention spans. Having been the press darling at the beginning of the summer, the Tea Party favorite is now being cast as the second runner-up in the GOP beauty contest. (You know, the one whose smile at the winner looks suspiciously homicidal.) As for the rest of the field–they might as well be named Other for the visibility they got out of the debate.

One thing the debate demonstrated was that none of the candidates was another Reagan (and it would be snide to add, thank God). Indeed, there’s reason to believe that Reagan wouldn’t make the cut as a candidate given the extemism of the current GOP. While Reagan maintained a shameful silence as thousands died from the expanding AIDS epidemic, he could also be surprisingly nondoctrinaire about gay issues. He invited the first gay couple to spend a night at the White House, and his opposition was largely responsible for the defeat of a 1978 California ballot measure that would have banned gays from teaching.

Hard to imagine any of the current crop of Reagan worshippers being as forward thinking in 2011 as Reagan was 33 years ago.

If you’re disappointed that this debate was a missed opportunity for more verbal gay bashing, not to worry. Next Monday, CNN and the Tea Party Express are holding another GOP presidential debate. Given the Tea Party’s involvement, we can almost guarantee that there will be plenty of chances for the candidates to practice their homophobic vocals then.

from bad to worse
7 comments