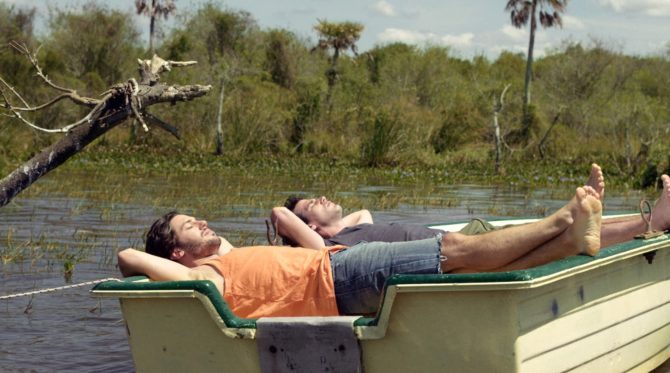 Attention all readers who take their their romance bittersweet: the new Argentine film Esteros is an extraordinary exemplar of this genre. It also qualifies as a fine piece of queer filmmaking.

Directed by Papu Curotto from a script by Andi Nachon, Esteros centers on the reunion of two childhood friends. Mati (Ignacio Rogers) and Jero (Esteban Masturini) spent summers together at a family home, the sons of close friends. The two became inseparable as they fished and swam in the nearby estuaries (sort of natural canals and wetlands that serve as a almost too obvious metaphor for the boys budding sexuality). When Mati’s father took a new job in another city, the two lose contact. What’s so unusual about the depiction of their complete infatuation with each other is the lack of disproval from parental figures. Jero’s mother, in fact, happily snaps a photo of the two boys lying sleeping in a hammock together, but it’s never quite clear if she gets the sexual nature of their feelings for each other. 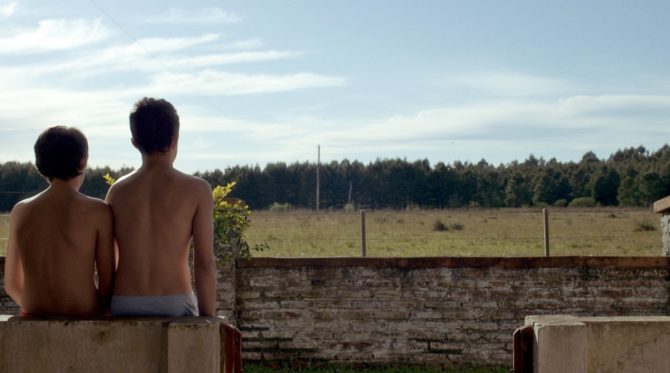 Flash forward twenty years, and a chance encounter reunites the men. Mati now works as a biologist and has a longtime girlfriend, Rochi (Renata Calmon), while Jero has become a semi-employdc make-up and special effects artist who is mostly just “gay,” which makes Mati uncomfortable because of his complicated feelings toward thei fledgling sexual experience as adolescents. Still, the two can’t quite deny their history, or the magnetic pull they feel toward one another.

So, will they or won’t they? Do they even want to? Is Mati even gay, or did he just enjoy the same kind of experimental sexual experience that so many adolescent men and women do? Will a childhood bond ignite romance?

Don’t expect us to answer those questions here. Esteros does a fine job of keeping the viewer guessing, dropping hints that could go multiple directions. Gorgeous photography and an almost voyeuristic intimacy of the film make Jero and Mati fascinating to watch.

At one point, Mati chides Jero for living a juvenile life of quick sex without relationships or family. Whether his equating gayness with youth and promiscuity says more about the character of Mati or attitudes toward gay sexuality in Argentina is left open to interpretation. The conversation does, however, set up a fascinating dynamic as both men feel their old feelings resurface. Far from an oblivious dope, long-suffering Rochi senses the profound bond between the two men, one that far surpasses her own connection, and the reasons why Jero might want to keep it a secret. That the movie treats the girlfriend—usually a useless figure in the is-he-gay-or-straight/dude-with-gay-history plot—as a thoughtful, caring woman only makes the film all the more compelling.

Masturini, as the smoldering heartthrob, and Rogers, as the reluctant lover, both enjoy an easy sexual charisma that makes their chemistry irresistible to all but the most hardened hearts. Director Curotto  fills the movie with some with plenty of symbolism. Scenes of young Mati & Jero spraying each other with water and shaving cream–and the metaphor it implies–will illicit a giggle or three.

Esteros is available on Netflix