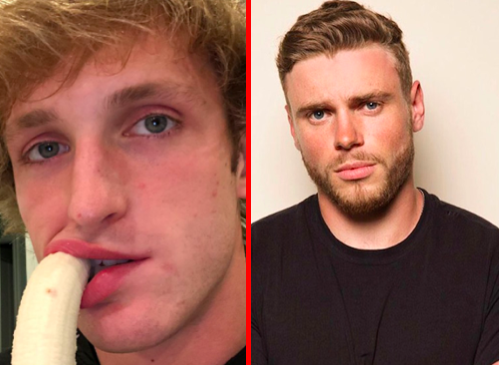 So last week, professional douchebag/YouTube star Logan Paul caused a stir when he said he was “going gay” for the month of March as part of a dumb 2019 challenge.

“And then March,” he said on his podcast. “Take a guess. What is it? Male-only March! So it’s male-only March, we’re gonna attempt to go gay for just one month.”

Paul thought the whole idea was hilarious. Unfortunately for him, nobody else seemed to agree. Including Guy Kenworthy.

Over the weekend, Kenworthy tweeted:

Instead of "going gay for a month" can Logan Paul "go away for forever"?

The tweet has received over 50K likes, nearly 8K retweets, and almost 500 comments.

And Gus isn’t the only person feeling some kinda way about Logan’s homophobic remarks. Here’s what other people on Twitter are saying about the 23-going-on-12-year-old’s antics:

january 2019:
logan paul claims he’s being gay for a month and completely invalidates the shit LGBTQIA+ deal with

find out next year

On Friday, Paul issued a 19-word tweet acknowledging he used a “poor choice of words” and asking GLAAD if they could “get together and talk about it” on his podcast next week.

very poor choice of words… my fault. let’s get together and talk about it on my podcast next week? https://t.co/Ki8RKgMJOO

Noticeably absent from his statement are the words “I’m sorry.”

Prior to all this, Paul was perhaps best known for sharing a video with his 15 million YouTube subscribers last January of Aokigahara, Japan’s notorious “suicide forest”, where he encountered a hanging corpse, pointed, and laughed.