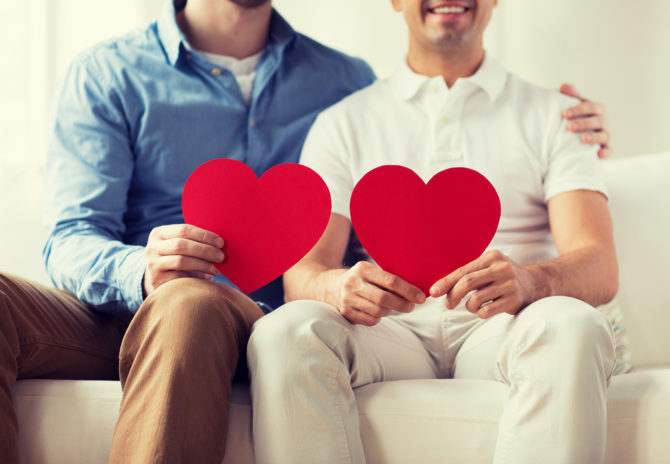 Looking for a little inspiration ahead of February 14? Whether you’re celebrating Valentine’s Day or Singles Awareness Day this year, Reddit users have plenty of ideas for marking the occasion.

In various r/askgaybros threads over the years — exhibits A, B, C, and D — Redditors have described how they’ve lavished love on their boyfriends and husbands, spent the day at home alone (or alone with their sex toys), or ignored the holiday entirely.

Related: MNEK and Olly Alexander’s anti-Valentine’s Day jam is about “f*ck boys who have done us dirty”

And there are no grand romantic gestures here: Many gays tend to have low-key V-Days even when there isn’t a global pandemic.

Here’s a smattering of comments from those threads…

“Me and my hubs are hosting all our single friends and a few couples for a casual dinner party. We never celebrate V-Day, and we both directly tell each other not to buy stupid gifts.”

“It’s like any other date night, just maybe a little fancier. Instead of having dinner at one of our favorite casual restaurants in town, we’re going to a suit-and-tie kind of place and spending the night at a hotel so that we can f—k all night without having to worry about walking the dog, having the cats interrupt us, needing to do dishes, etc.”

“Netflix and chill. Not a big deal. People turn it into a much bigger hype than it really is.”

“No different from any other day. We get each other a card and our fave candy, but that’s it. We usually try to go out for dinner but on a different day to avoid crowds.”

“My fiancé and I have never been into Valentine’s Day, so we sent each other a sweeter-than-normal ‘Good morning’ text when we woke up, but that’s about it.”

“Not big into it, never have been. Boyfriend and I (and all the others I’ve had, too) generally just have dinner together, do something together like watch a movie, and get each other little presents sometimes. That’s all.”

“Depending on our means, it’s ranged from fancy dinners to giving each other chocolate. This year’s a chocolate year.”

“Waiting until the 15th when all the candy goes on sale.”

“For about five years, a guy I met in a gay fundraising group would host a singles dinner on Valentine’s Day. He would bring little gifts to award the winners of some games he would organize. It was such fun.”

“Husband and I actively avoid going out to dinner on Valentine’s Day because the good restaurants are generally packed, then we both agree not to get each other anything, followed by us buying something small and edible for the other one anyway.”

“I’m taking my S.O. out on a hot dinner. Experiences are better than gifts, in my opinion.”

“I’ll make sweet, sweet love to one of those party-sized nacho trays from Taco Bell.”

“I personally favor Valentine’s Day gifts like a nice dinner somewhere or a play he’s interested in. The key to any gift-giving, though, is to listen to what the receiver’s interests are and to give accordingly. That’s true of everyone at any holiday, not just gay men for Valentine’s Day.”