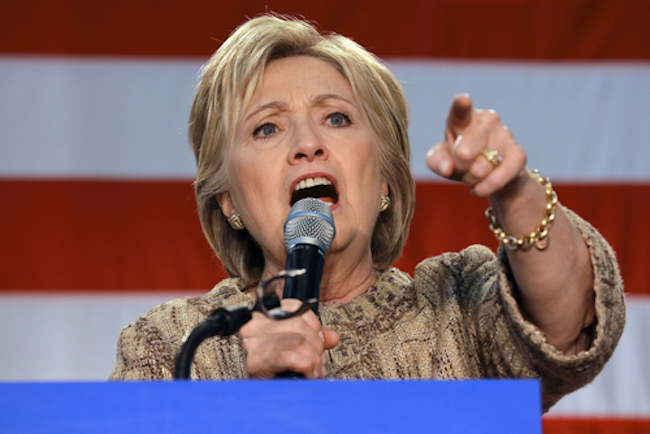 Hillary Clinton wants Donald Trump to officially come out against the alleged “gay purge” in Chechnya.

It’s a phrase she’s used several times following Trump’s election, and one she first used while standing in the UN’s Palais des Nations in Geneva in 2011 as Secretary of State.

“I know that the election hit a lot of us hard,” she said while receiving The Centre’s Trailblazer Award.

“Even when it feels tempting to pull the covers over your head, please keep going.”

She said it’s especially important right now since “we’re seeing clouds gathering on the horizon” for the LGBTQ community.

Speaking of Chechnya’s “gay purge,” which has allegedly seen over 100 men detained and at least three men killed, she said:

“We’ve heard terrifying accounts from Chechnya of gay and bisexual men being taken from their homes and families, tortured, even killed.

Then she suggested that “the progress that we fought for…that we celebrated and maybe even (took) for granted may not be as secure as we once expected.”

Clinton claimed that “when this administration rescinded protections for transgender students, my heart broke.”

“I thought of all our efforts to try to achieve an AIDS-free generation, and we were on the way.

We can, if we stay on that path, finally realize that dream – but not if we are forced off….

I think we have to face the fact that we may not ever be able to count on this administration to lead on LGBT issues.

Later, Clinton jokingly said she had a difficult time deciding whether she should attend the fundraiser or go see Bette Midler in Hello, Dolly!

“I really struggled to figure out which event would best reflect my commitment to the community.”

She said she reached a compromise, going to the dinner but obeying a song title from the musical: “Put On Your Sunday Clothes.”

Then she invoked a mantra that she said was “the kind of thing that does pop into your head when you’re out in the woods.”

“When a good friend or loved one says: ‘Quit yelling at the television set,’ just remember: we need to resist, insist, persist and enlist.”

Subscribe to Queerty for a daily dose of #politics #bettemidler #dolly! stories and more