Jarrod Frieder makes his debut as a feature film writer/director with the comedy Three Months, which lands on Paramount+ today.

Related: What to Watch: Troye Sivan in love, a dance club for the deaf and a Queerty exclusive

The movie tells the story of Caleb (Troye Sivan), a South Florida teenager exposed to HIV on the eve of his high school graduation. So begins three months of HIV tests to see if he’s contracted the virus. To wait out the interval, he joins an HIV support group and immediately falls for Estha (Viveik Kalra), a handsome Indian immigrant going through a similar scare. Over the course of the summer, Caleb must face his own childishness and confront family trauma concerning his grandparents (Ellen Burstyn and Louis Gossett, Jr.) and estranged mother (Amy Landecker).

Related: Troye Sivan just teamed up with Beyoncé and fans are obsessed

The script for Three Months first made headlines in 2015 when it landed on the Hollywood Blacklist, a catalog of the 10 best un-optioned scripts in town. Seven years later, the completed film is finally here. We caught up with Frieder to chat about the project. Here’s what he had to say…

So there’s one question I’m dying to ask. This script landed on the Hollywood Blacklist in 2015. That’s sort of a dubious honor, in that most of the scripts don’t get made, and when they do, they often make bad movies (Bright, Pan, Butter, etc.). Did it make it harder to get the movie made?

Honestly, it was f*cking incredible. Can I curse?

It gives it a badge of honor where people take it more seriously. Sometimes they are bad, but King Richard was on the Blacklist. And that’s one of my favorite movies this year. So it depends, but it brings a legitimacy to the script, especially for an unproduced screenwriter/director. It was supremely helpful. 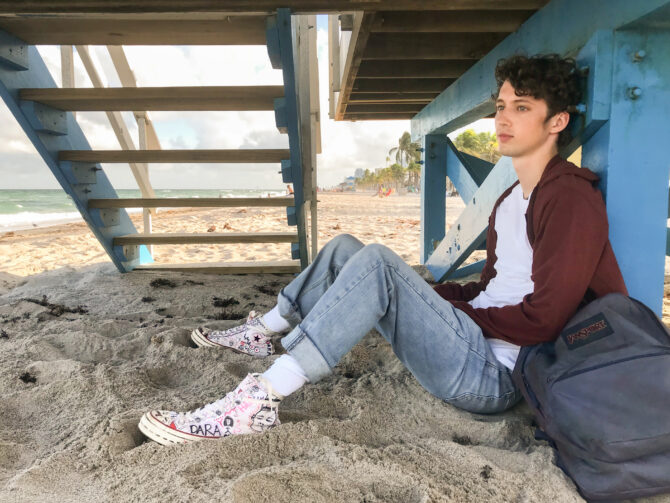 Do you think the subject matter was too much for Hollywood? Was that why nobody would touch it in the beginning, in that it’s about a teen with possible HIV?

Yes. It’s near impossible to get anything made, but it’s especially hard for projects with queer protagonists. Even though people like to say we’ve come a long way—and we have—we still have a long way to go. There are not enough queer, indigenous, black, POC movies or TV shows. Hollywood still does operate in a patriarchal system. So it’s a miracle when something gets made, and this feels like a tiny miracle. People were definitely scared of it.

How much did the script change from the time it landed on the Blacklist?

This movie has had so many lives. I tried to make it as a movie. Then I sold it to a streaming service as a series. Then I made it as a movie again. I’ve maybe written 5 billion drafts, and I was rewriting on set as we were shooting. Things evolve. I was really blessed that MTV didn’t ask me to de-gay [the story]. Pam Post who helped create Drag Race was one of the shepherds, and was so supportive of the subject matter. That’s such a rare experience in Hollywood, so I’m grateful to them for believing in the story. 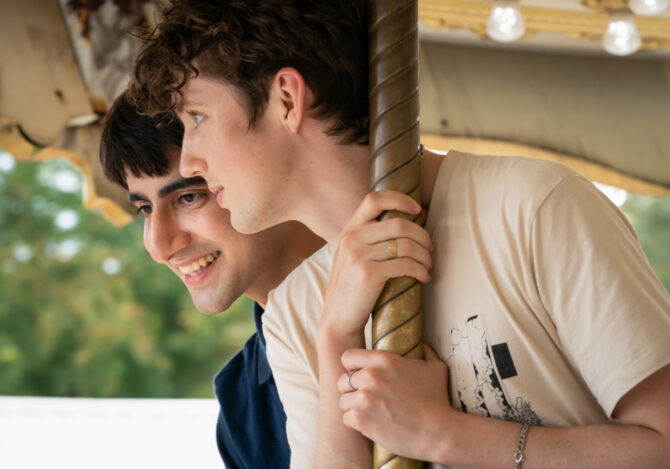 There was a period when it felt like we had too many damn HIV movies. But now you’ve made a comedy about HIV. We have Pose and It’s a Sin which go back and look at the epidemic. Why right now? Why is now the full circle moment?

For me, it was important to tell this story because I grew up with Angels in America, Rent, Philadelphia. Those were amazing and made me feel seen, but I hadn’t seen something that dealt with what HIV is like in the modern era. It’s no longer a death sentence with adequate healthcare. What we have to focus on are the shame and the stigma rooted in the homophobia that was taught to us generationally. Seeing it in a new light, continuing discussion and dialogue about living with HIV—it’s not the way it used to be.

Music plays a huge role in the film, including new songs by Troye Sivan. How many of the songs did you pick, how many were your music supervisor?

It’s a collaborative effort. I had an amazing supervisor, Linda Cohen, who specifically sent that Scissor Sisters song my way for a scene. Besides that one, I mostly picked everything. The sonic landscape of this was so important to me, and it’s also mostly LGBTQ artists. It represents Caleb’s world in an authentic way. And it helped capture the tone of the movie. It deals with serious subject matters, but it’s also fun.

You’re also working with a pair of luminaries here, Ellen Burstyn and Louis Gossett, Jr. How intimidating is it to direct them?

I was sh*tting my pants. I learned so much from them. And they were so generous with their gifts and abilities. They provide a center of gravity for the film. You know Caleb is taken care of because he’s with these people. I felt so taken care of them on set because they’ve done this. They’re the best that’s ever been. It was surreal.

This is your first time directing. How do you felt you grew artistically and personally?

You know, I learned that conflict is a part of the process. I’m a conflict-averse person. So disagreements sometimes scare me. What I learned is as long as you approach things with integrity, from a place of love, and as long as you listen, you can almost overcome anything. As a first-time director, the thing most valuable to me was listening. I don’t think we should underestimate that skill. It breeds empathy and a space for people to perform their best work.

Three Months streams on Paramount+ Feb. 23. Watch the trailer below.