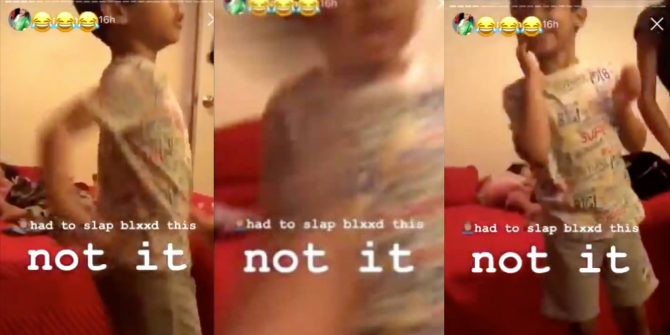 A disturbing TikTok video of a little boy being slapped across the face and called an antigay slur by his babysitter has gone viral.

In the 7-second clip, the boy can be seen doing the “Savage” TikTok dance alongside a little girl. Suddenly out of nowhere, his babysitter smacks him upside the head and says, “You don’t do that sh*t! F*ck is wrong wit you? Gay ass bitch!”

The stunned boy falls back then holds his cheek and immediately stops dancing.

The video was originally uploaded by Twitter user @ylo_gang_ along with the caption, “I’m crying,” presumably laughing at the child being abused.

Thankfully, few others found it funny. In fact, most were absolutely horrified by the babysitter’s behavior.

It’s like some parents would rather their son grow up traumatized than feminine. She has such a toxic idea of what masculinity is that she wants to enforce it on him at that young of an age. Like he’s a kid let him dance

whats funny? it’s literally child abuse… i hate toxic parents then they get all mad when their child grows up and distance themselves from them.

this isn’t funny. it’s sad. that the poor boy can’t do a tiktok dance without having hands put on him for being “too feminine” and being called out of his name. i’m begging..don’t have kids if you aren’t fit to properly care for them.

When the boy’s mother and godmother saw the video, they, too, were upset.

“My godson comes from a loving home & whether he’s gay or not we love him regardless,” the godmother said in a tweet.

She went on to explain the boy’s mother wasn’t aware about the incident until after she saw the video.

“We always let him be himself,” the godmother continued. “His mom thought she could trust this person to watch them for 10mins & this happened.”

This is my Godson & the person slapping him is not his mom, this person was supposed to be babysitting. Moms wasn't aware of what happened until I showed her this. My godson comes from a loving home & whether he's gay or not we love him regardless. The cops- https://t.co/bfWsPN1tvL

Shortly after that, the godmother posted a video of the boy’s mother explaining that the person behind the camera was actually the boy’s aunt.

“Everybody thinks it’s me and everybody was saying all these negative things about me,” she said. “You know, I’m not worried about none of that. My son is fine, I know he’s good over here. I know he’s being loved right.”

“I’m just hoping and praying they don’t take my babies away, cause I’m not ready to lose them,” she adds.

According to the family, police were notified about the incident and the aunt plans to turn herself in.